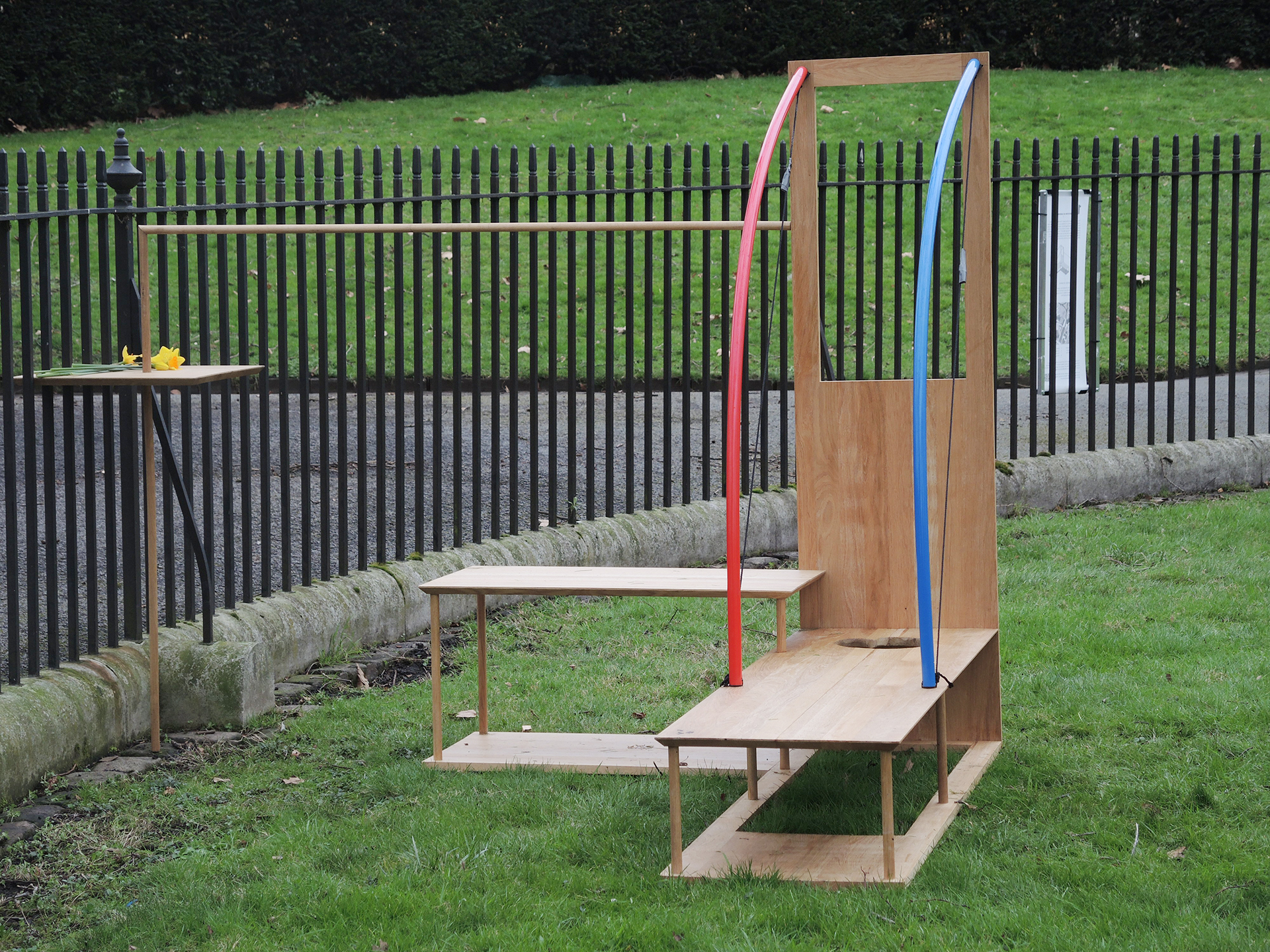 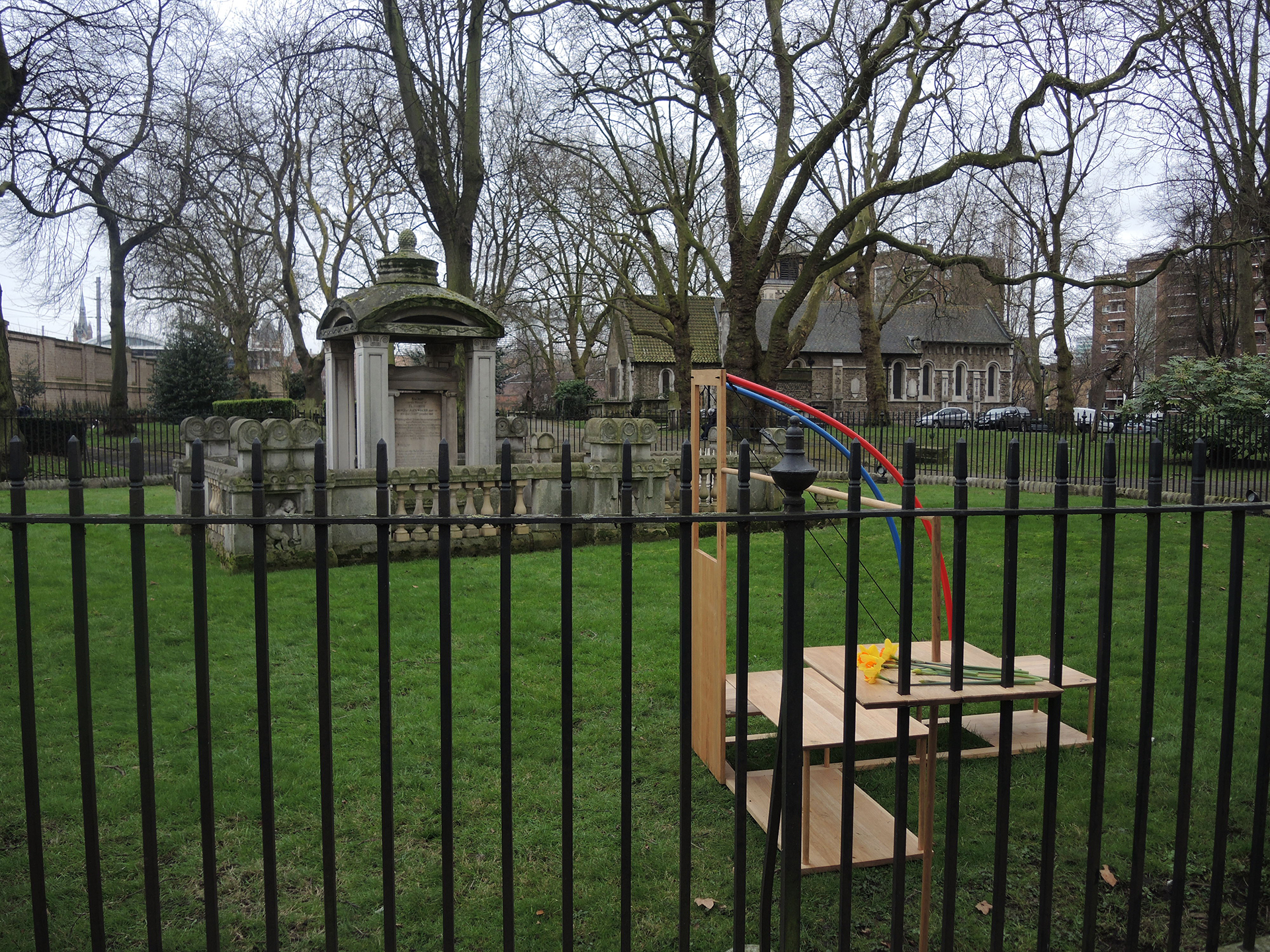 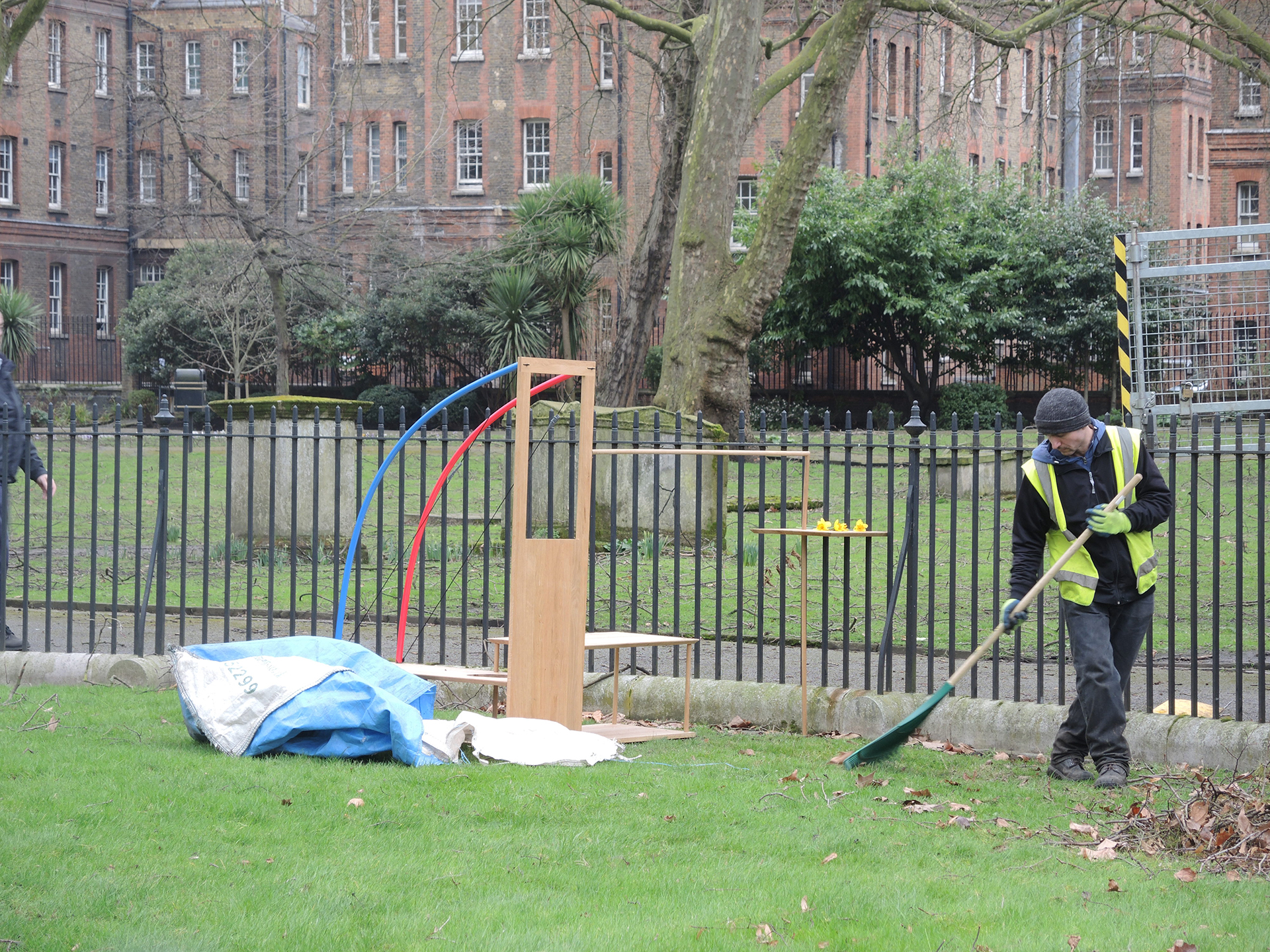 Board 1
across the water
site: St Pancras Gardens
Originally built for his beloved wife and son, the graveyard became in the 1920s with its concise shape the archetype of the British red telephone boxes. 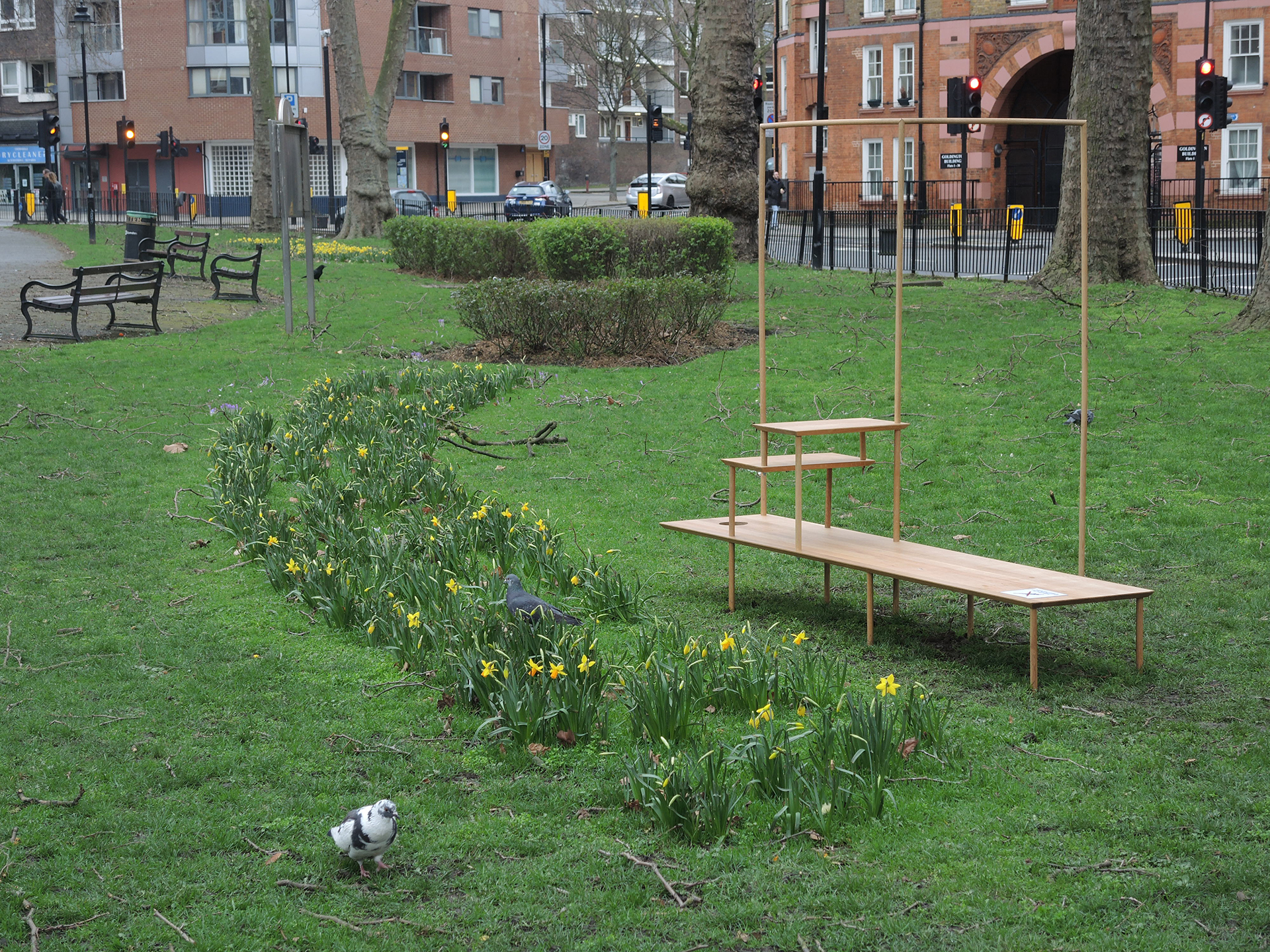 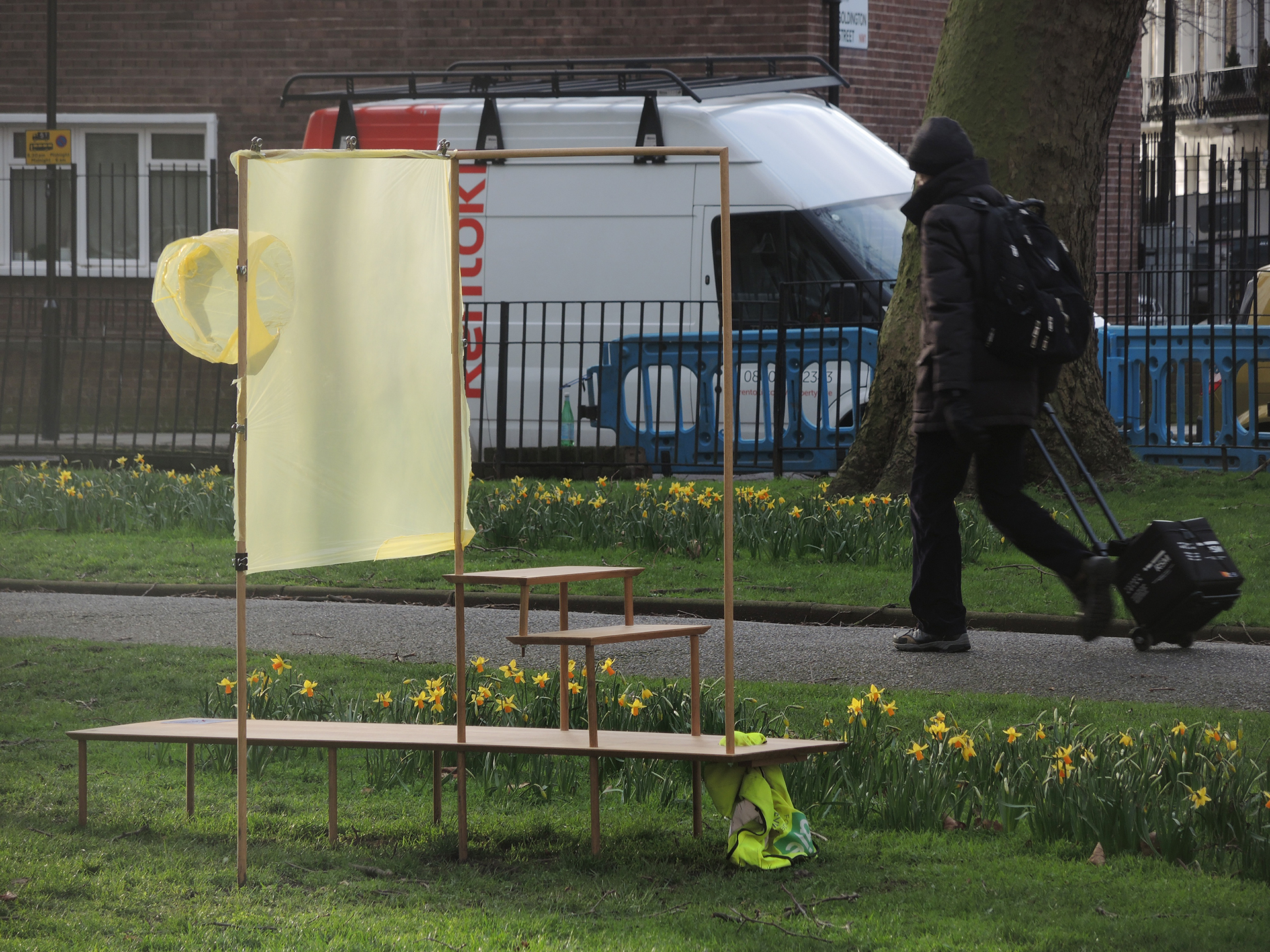 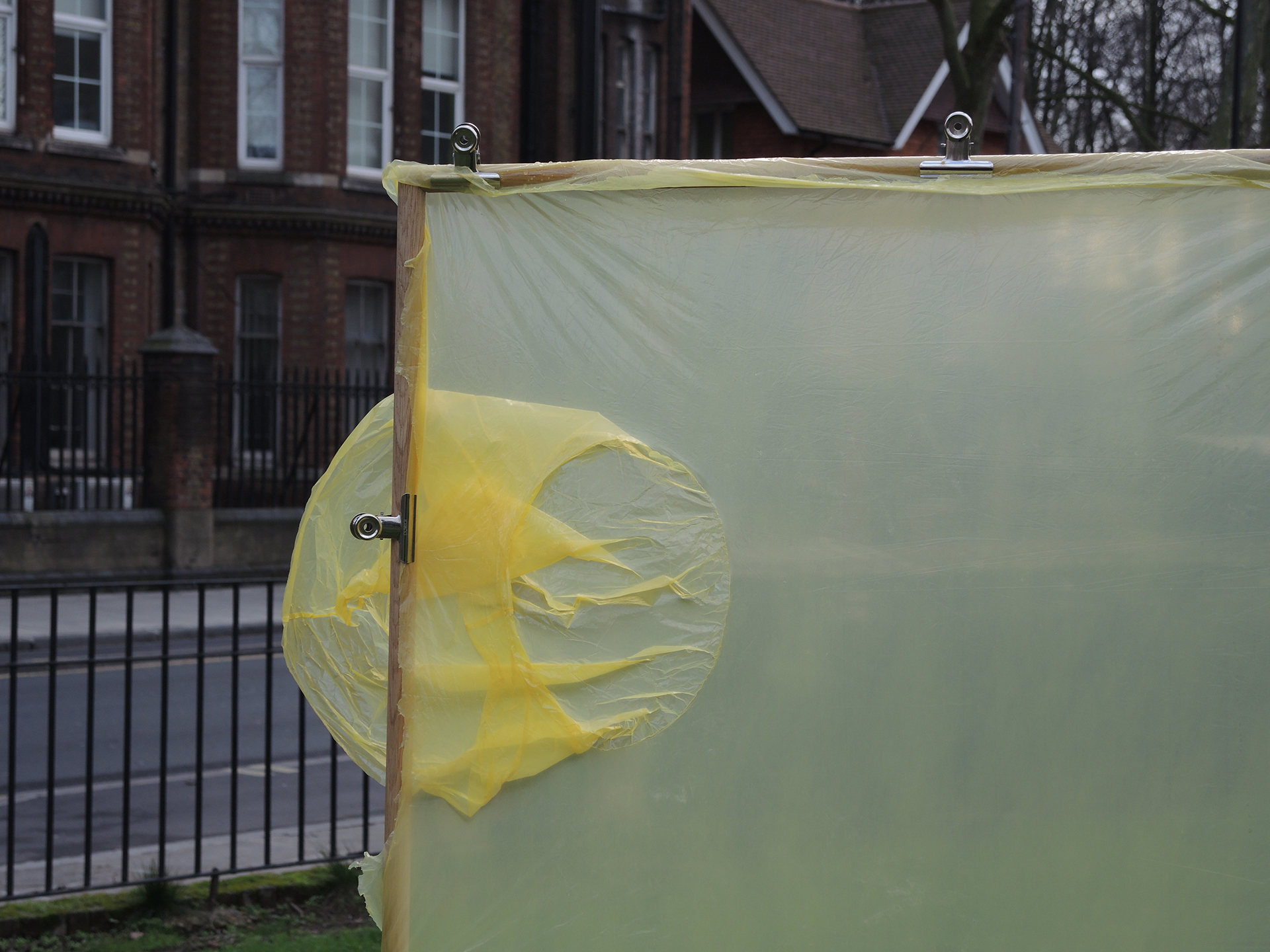 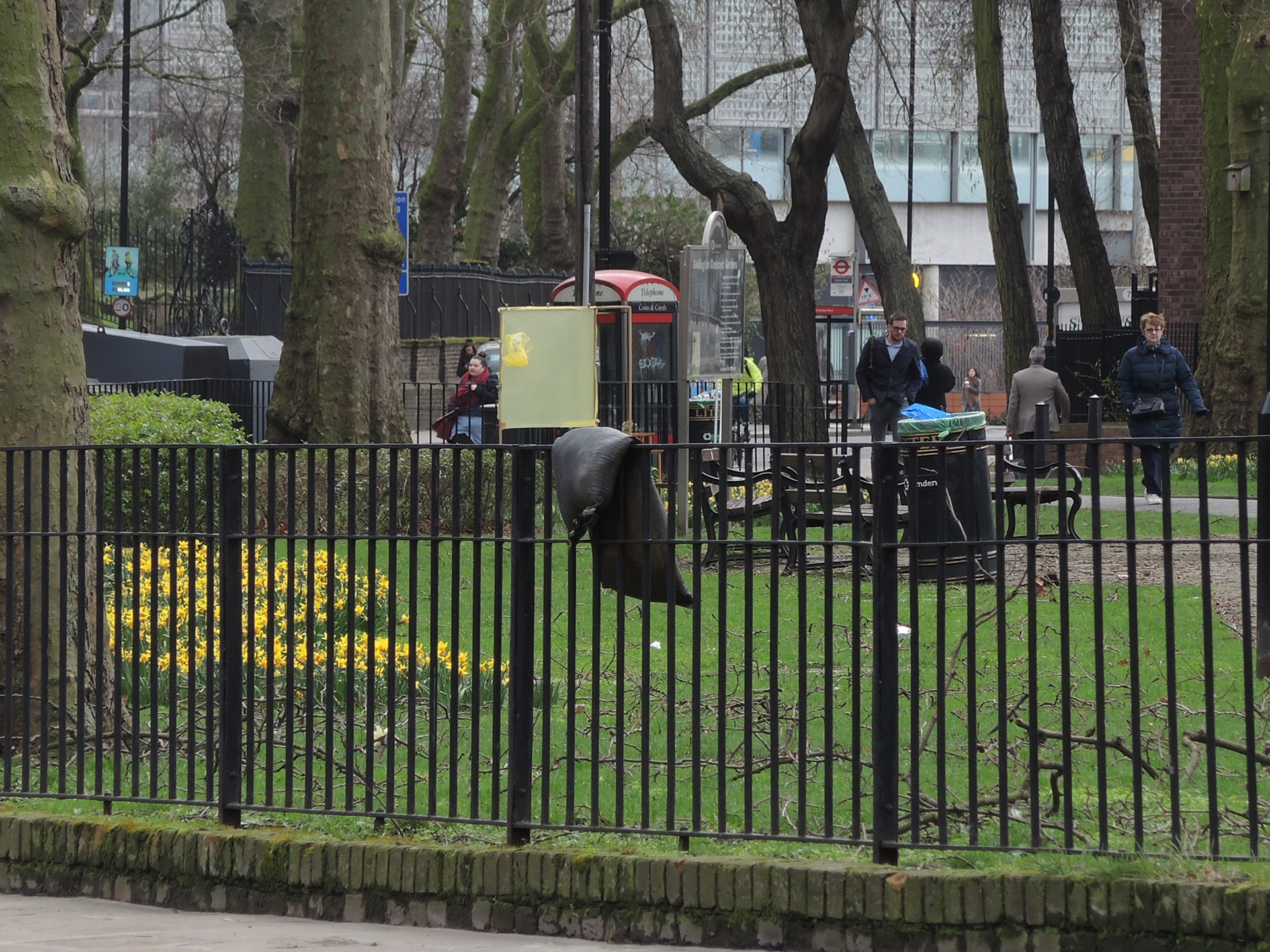 Board 2
into the ground
site: Goldington Crescent Gardens
The small green park in front of St. Pancras Hospital was described as a very busy place. Concerns of „anti-social behaviour“ were raised repeatedly, but both – its fragile structure and the thin skin of its screen – remained intact for eight days. 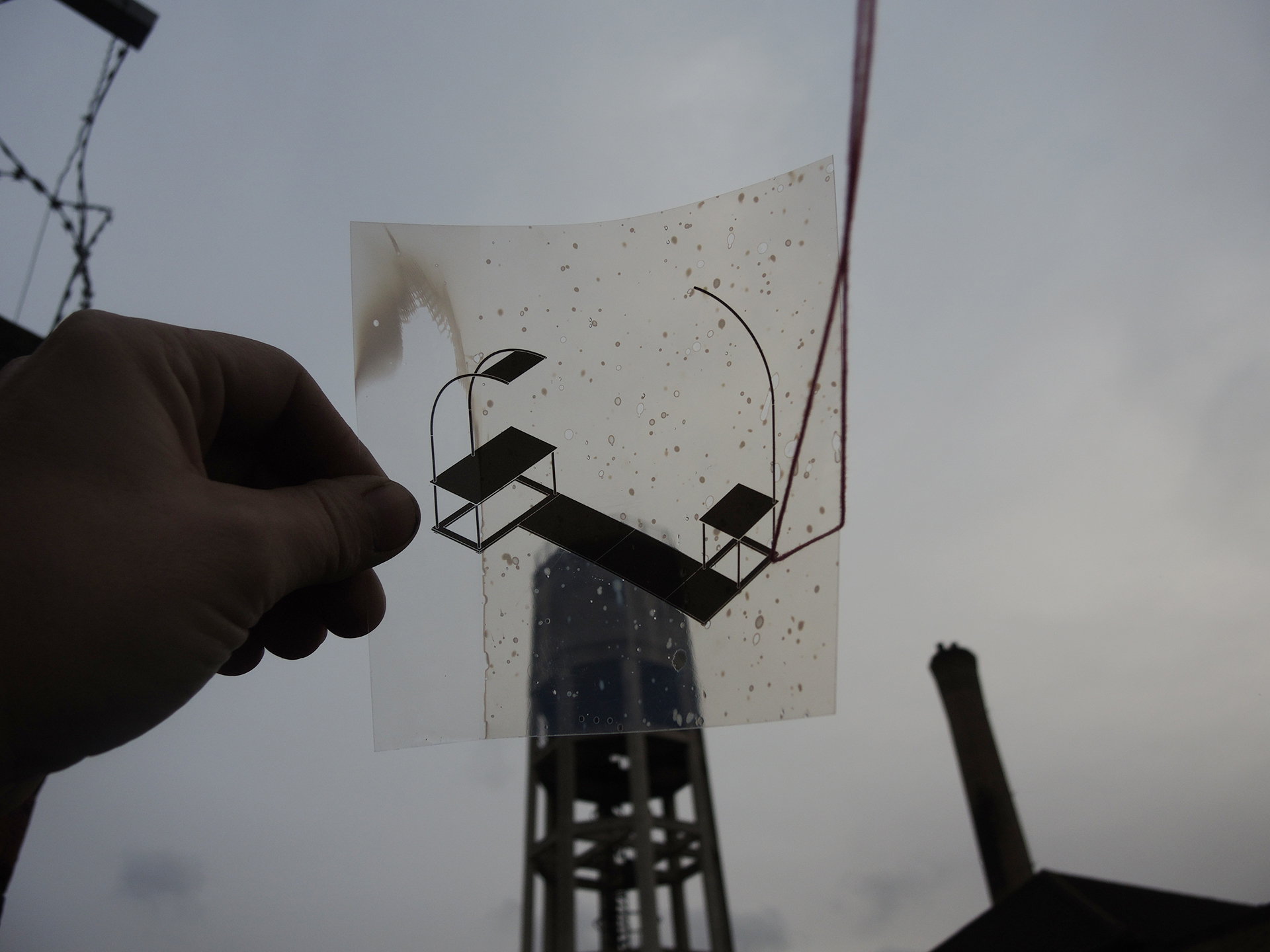 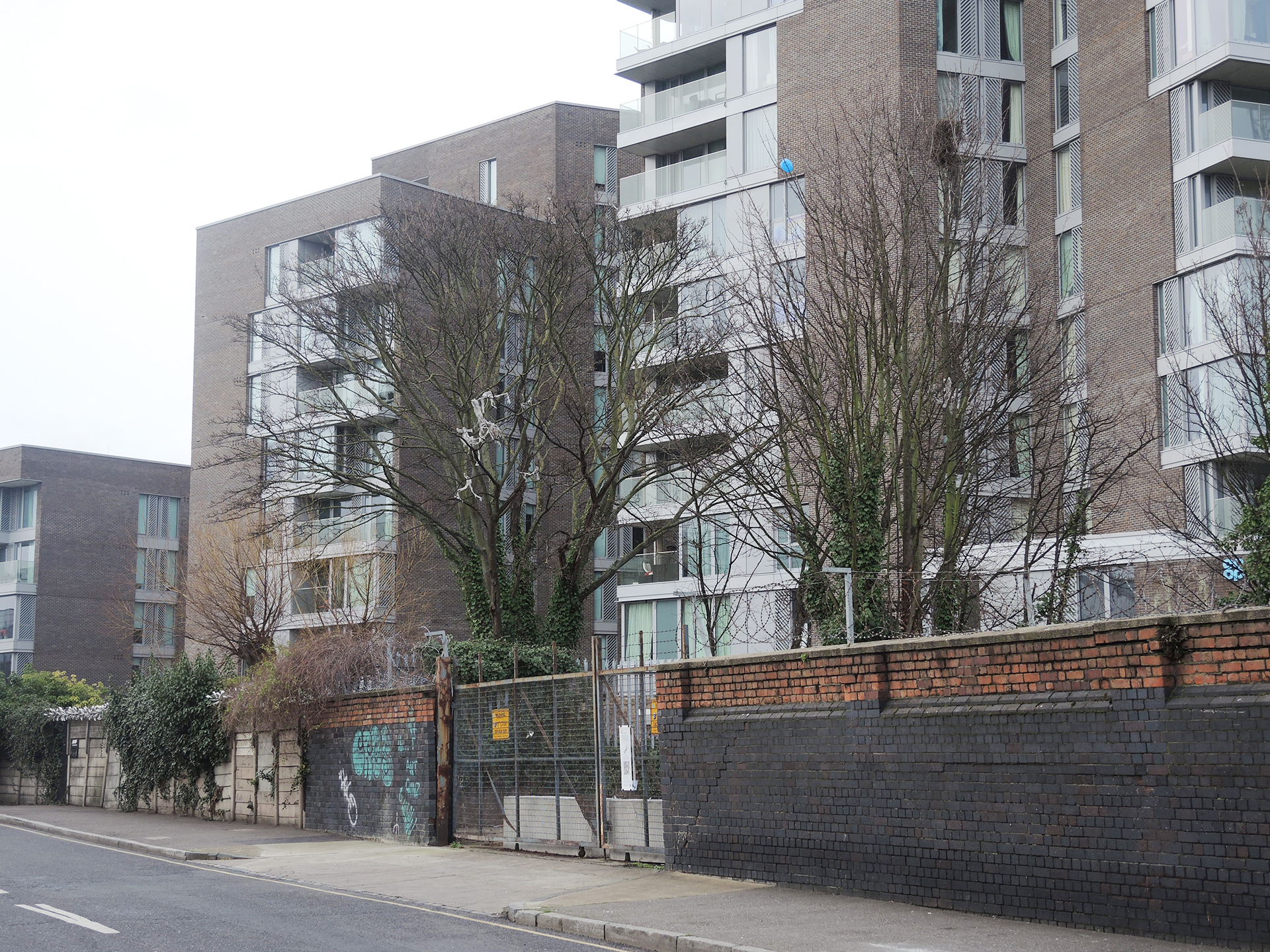 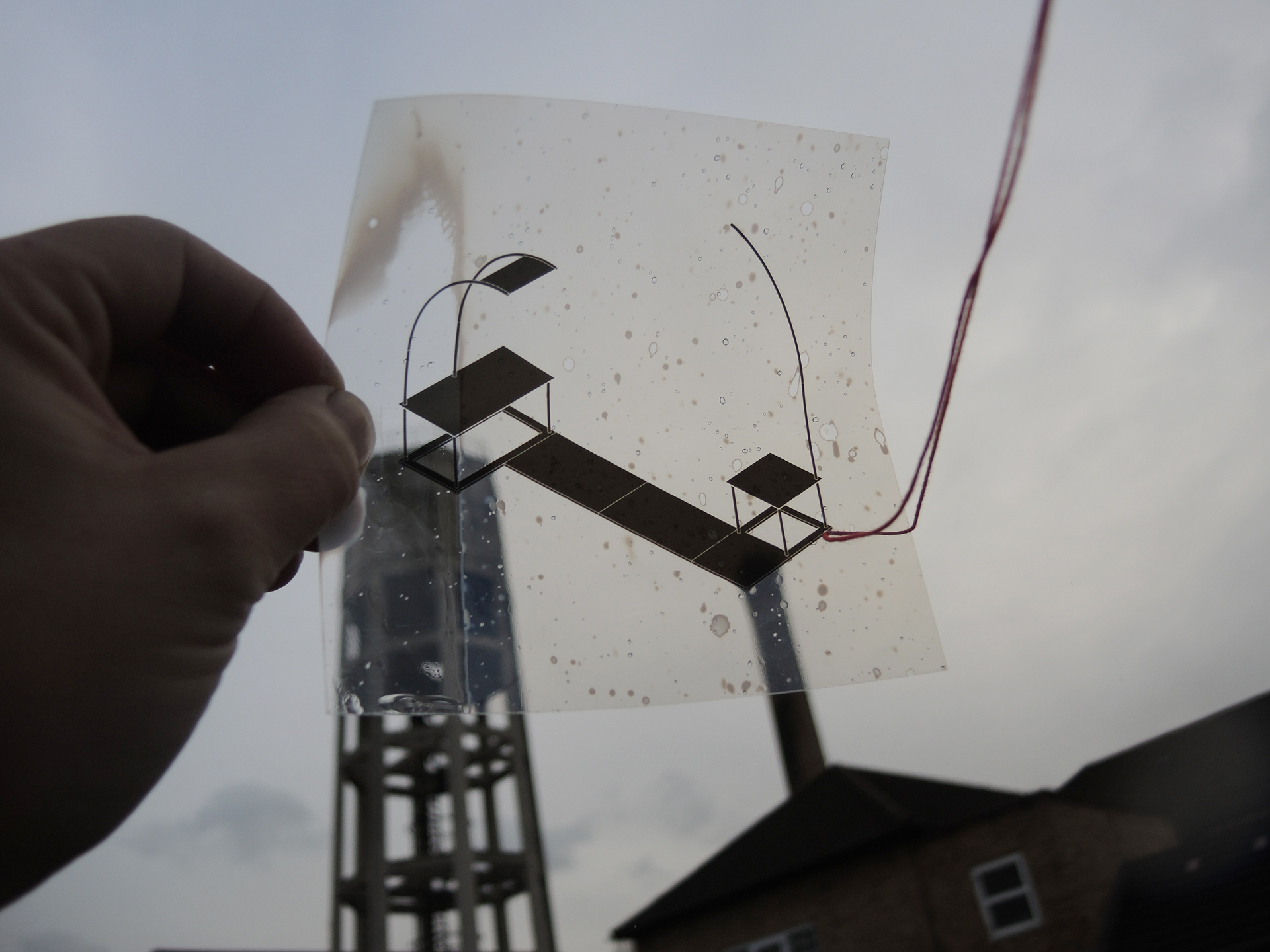 Board 3
against the sky
site: St Pancras Hospital Watertower
Over the period of eight days, in a quiet street at the back of St. Pancras Hospital water was constantly leaking from a house, cars left their engines running day and night, and visitors placed the Board wherever they wanted. 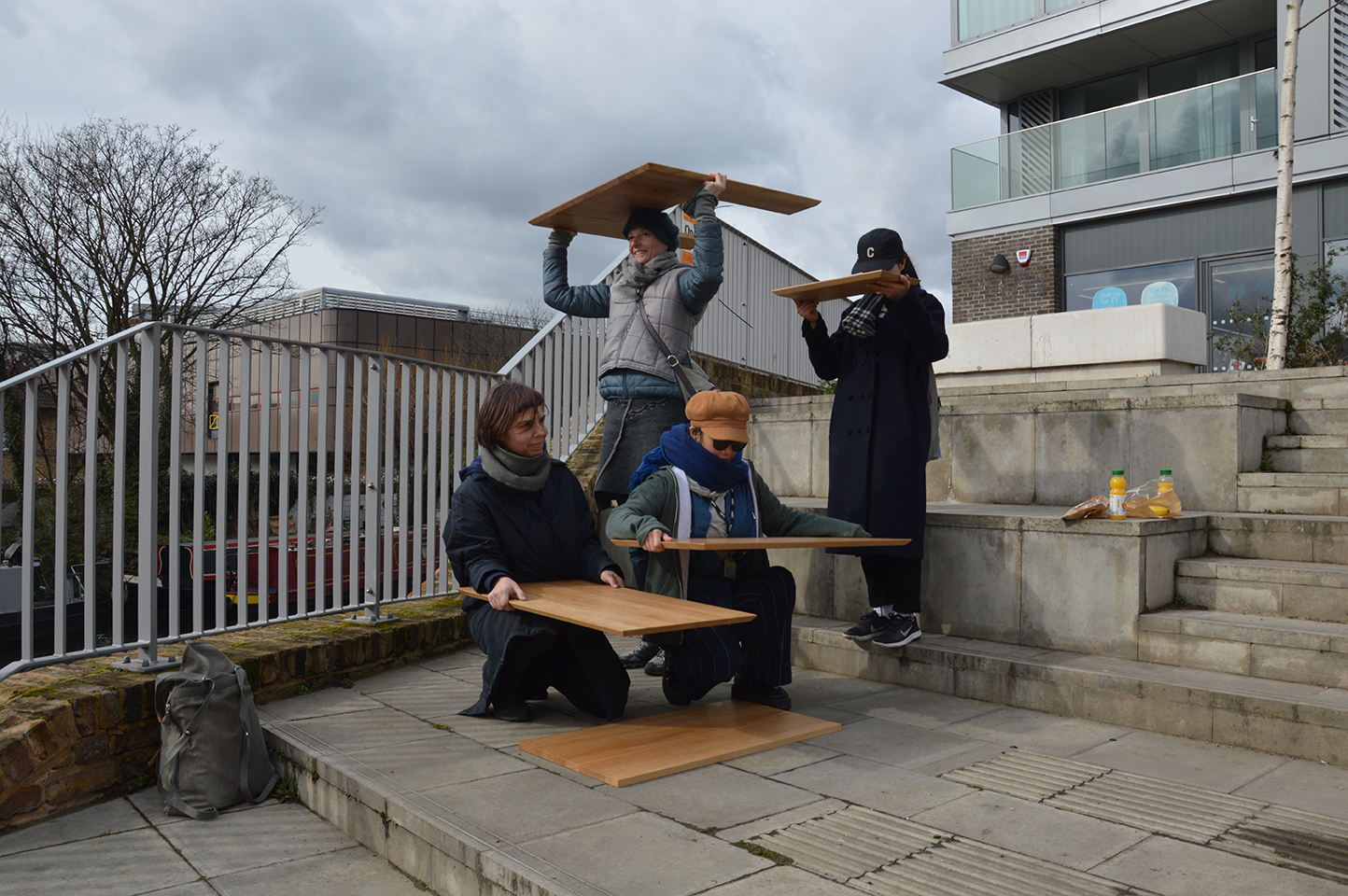 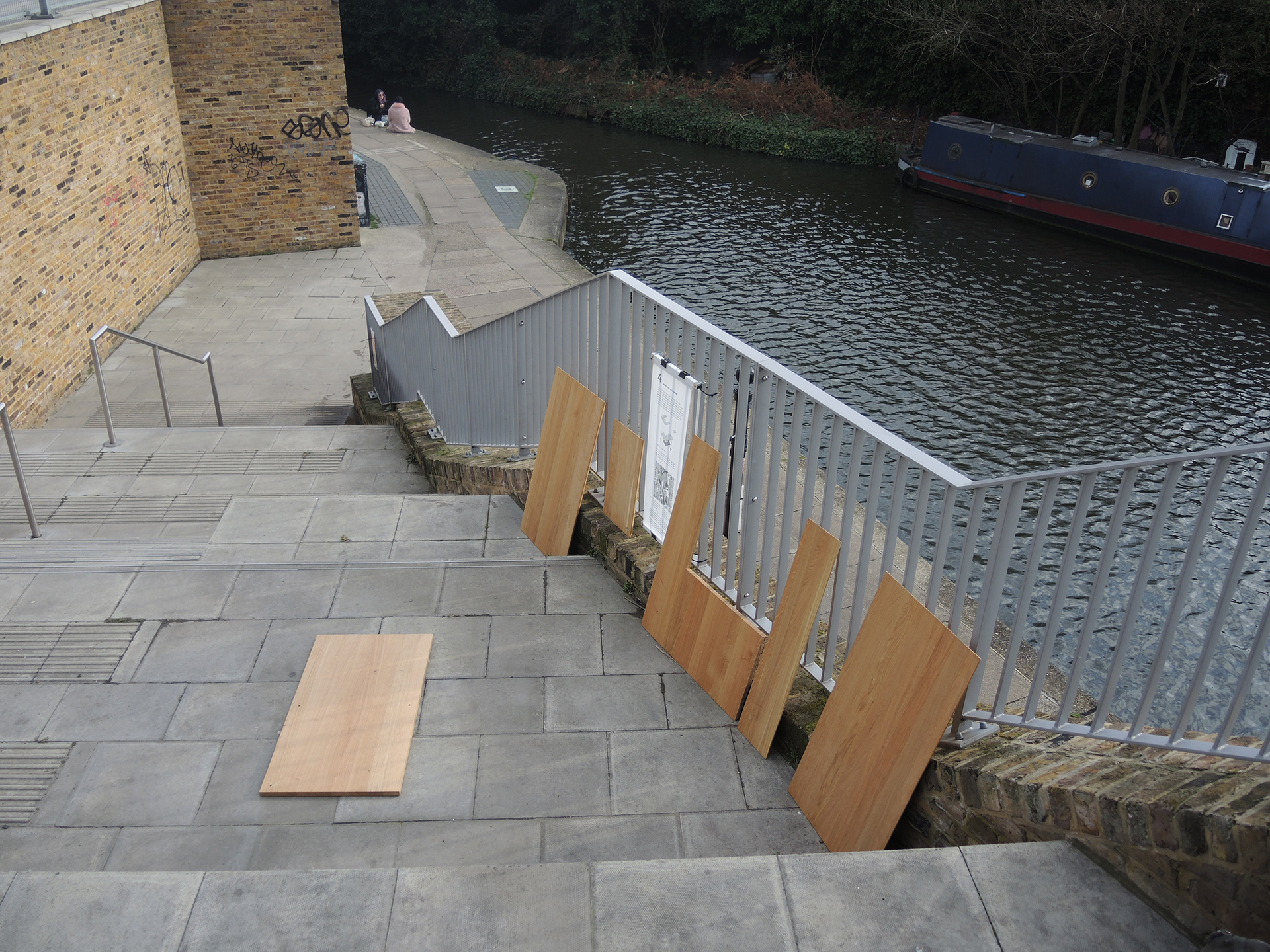 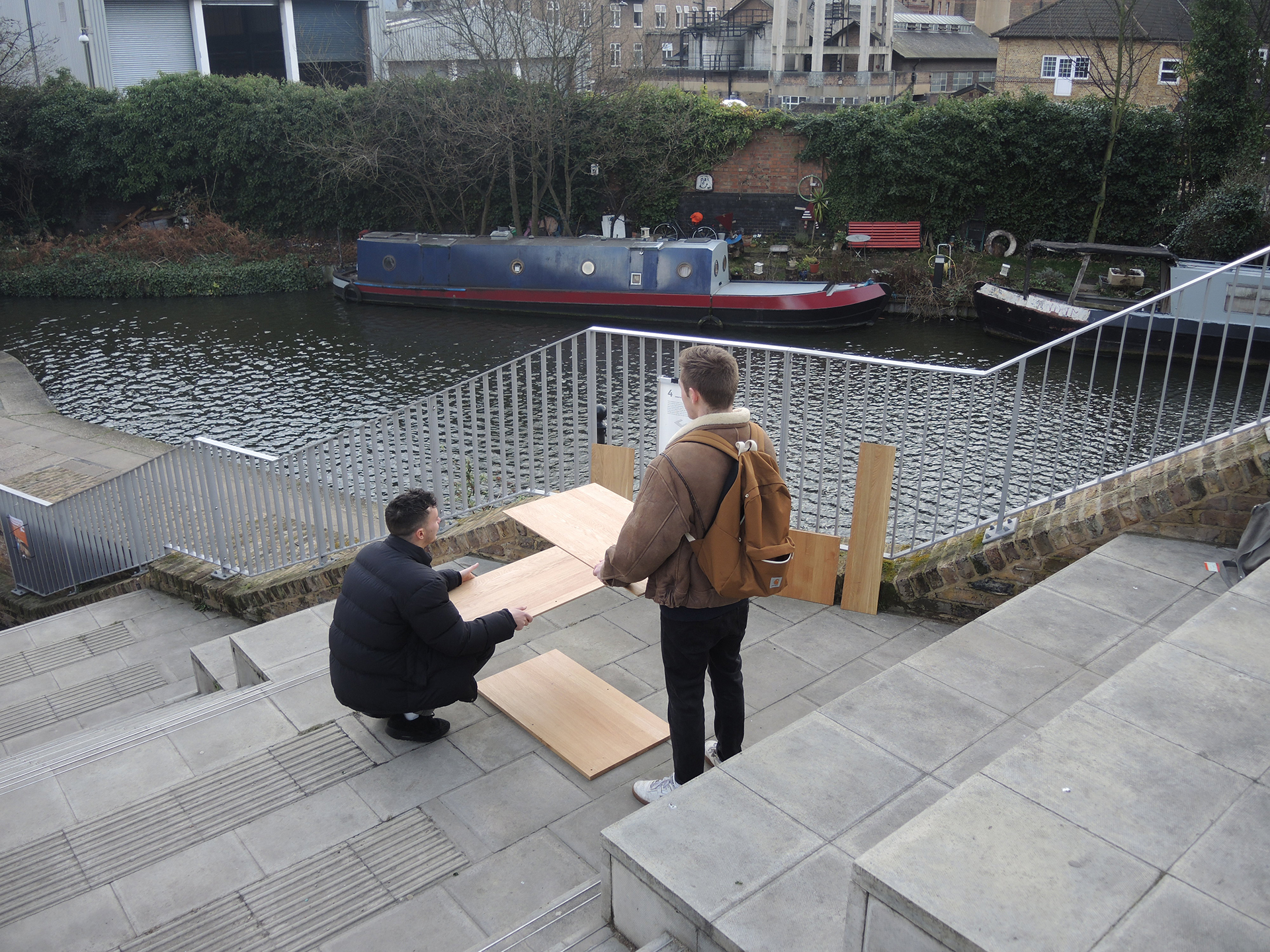 Board 4
to be held
site: Stairs Camley Street
Despite persisting attempts, it was impossible to investigate the owner of this stairway. Neither district nor neighbours were able give a clue. During the first night, the container in which the board was kept – and all its parts – wandered up the steps, close to the wall of a building, where a similar box was already positioned. There it remained untouched for the next eight days. 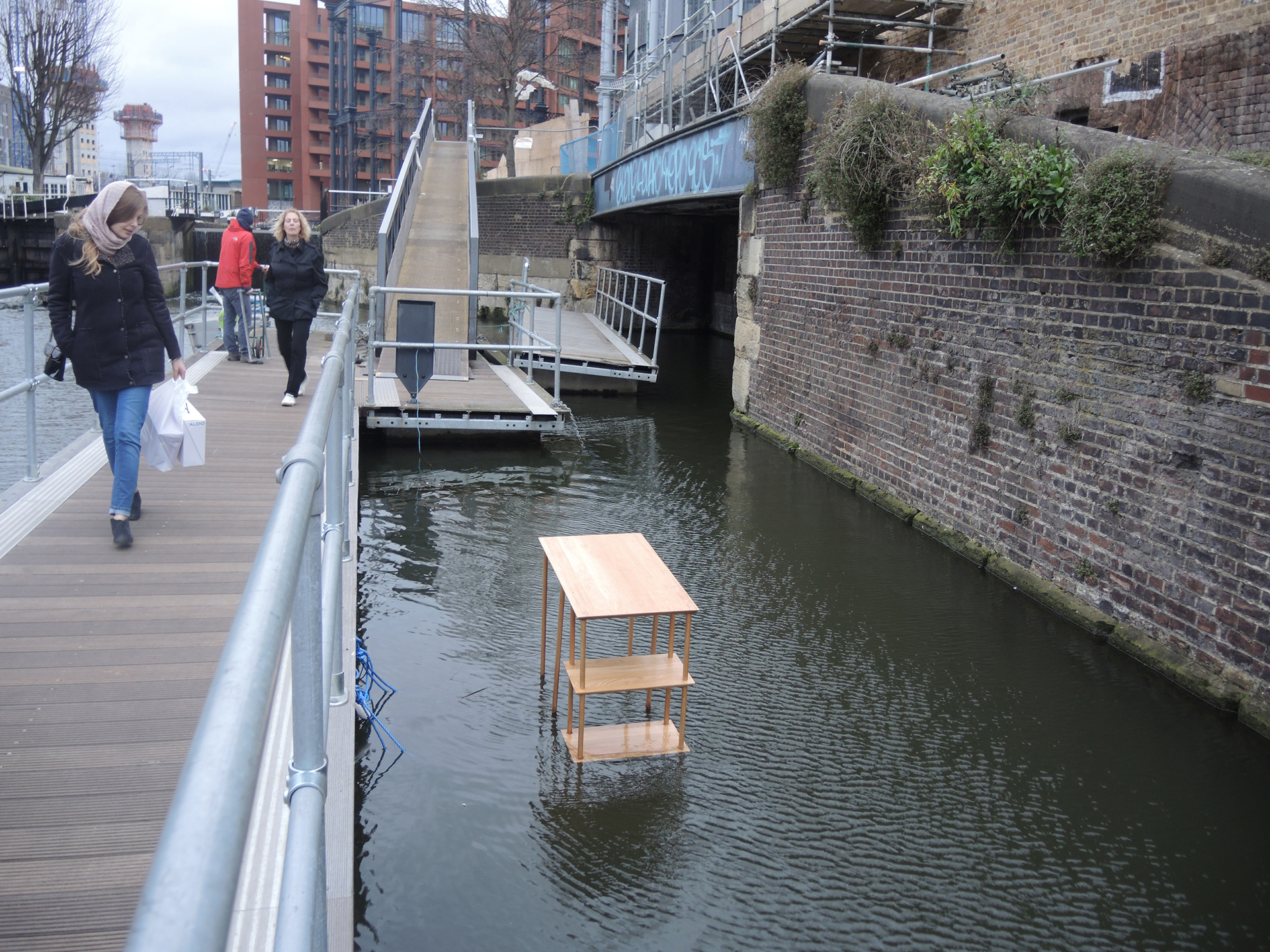 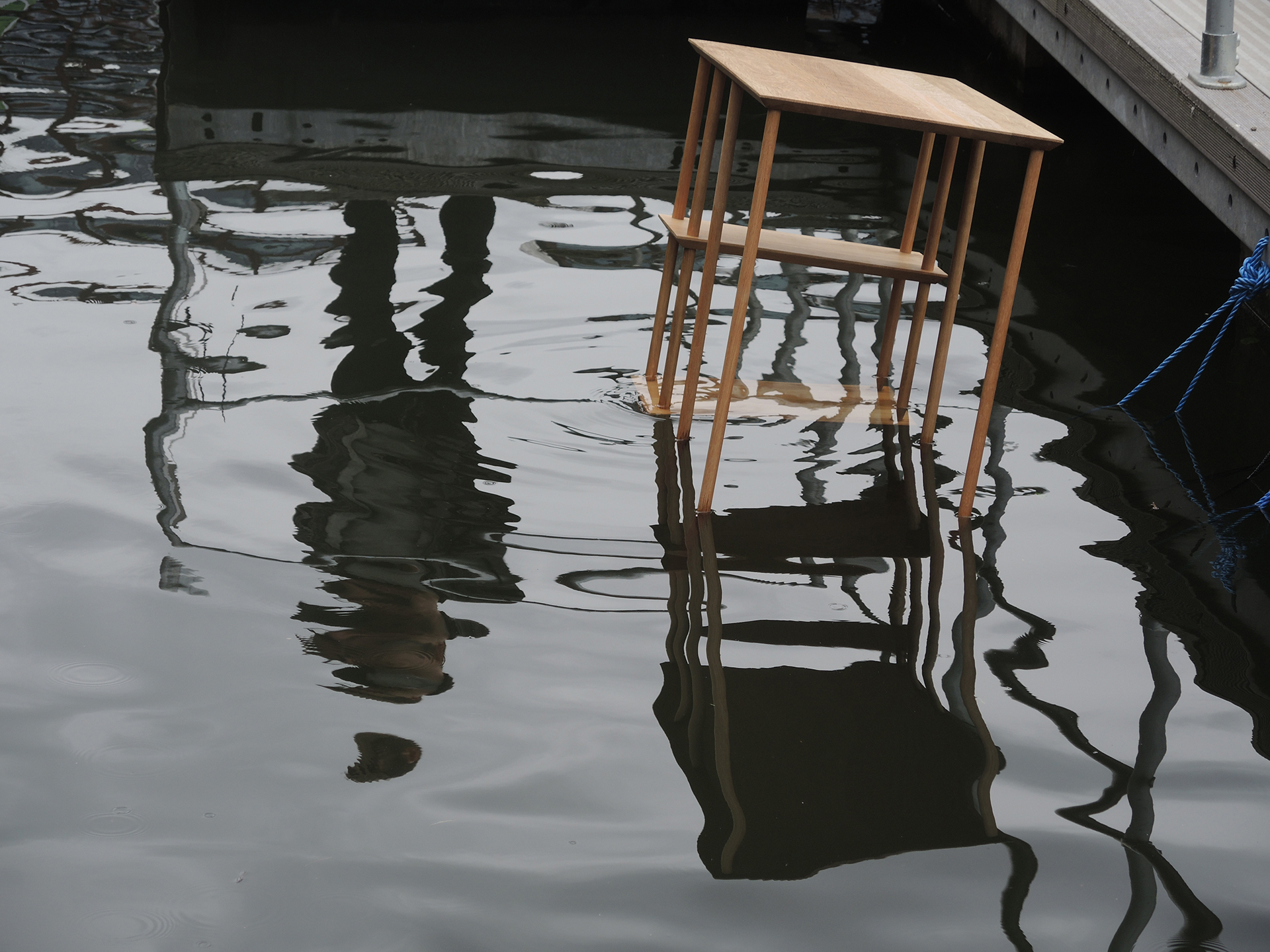 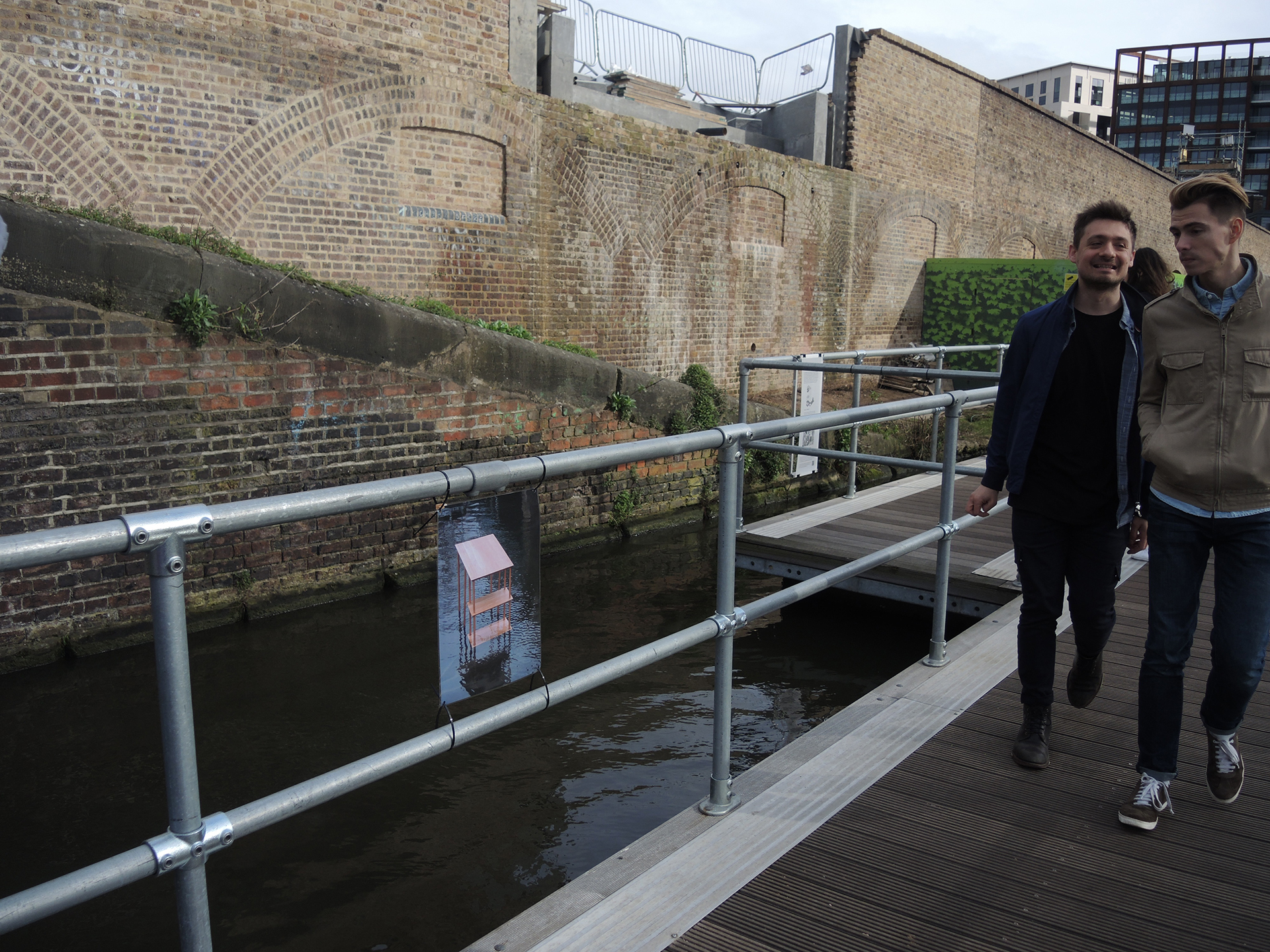 Board 5
immersed
site: Regent’s Canal
After weeks of searching together with the Commodore of the Cruising Club, the Board finally found its place in the canal. It stood upright in the water for two days, then it tipped and finally sank to the bottom. Next to where it had been standing, some of its loose parts lay on the pontoon. Someone had fished them out of the water. 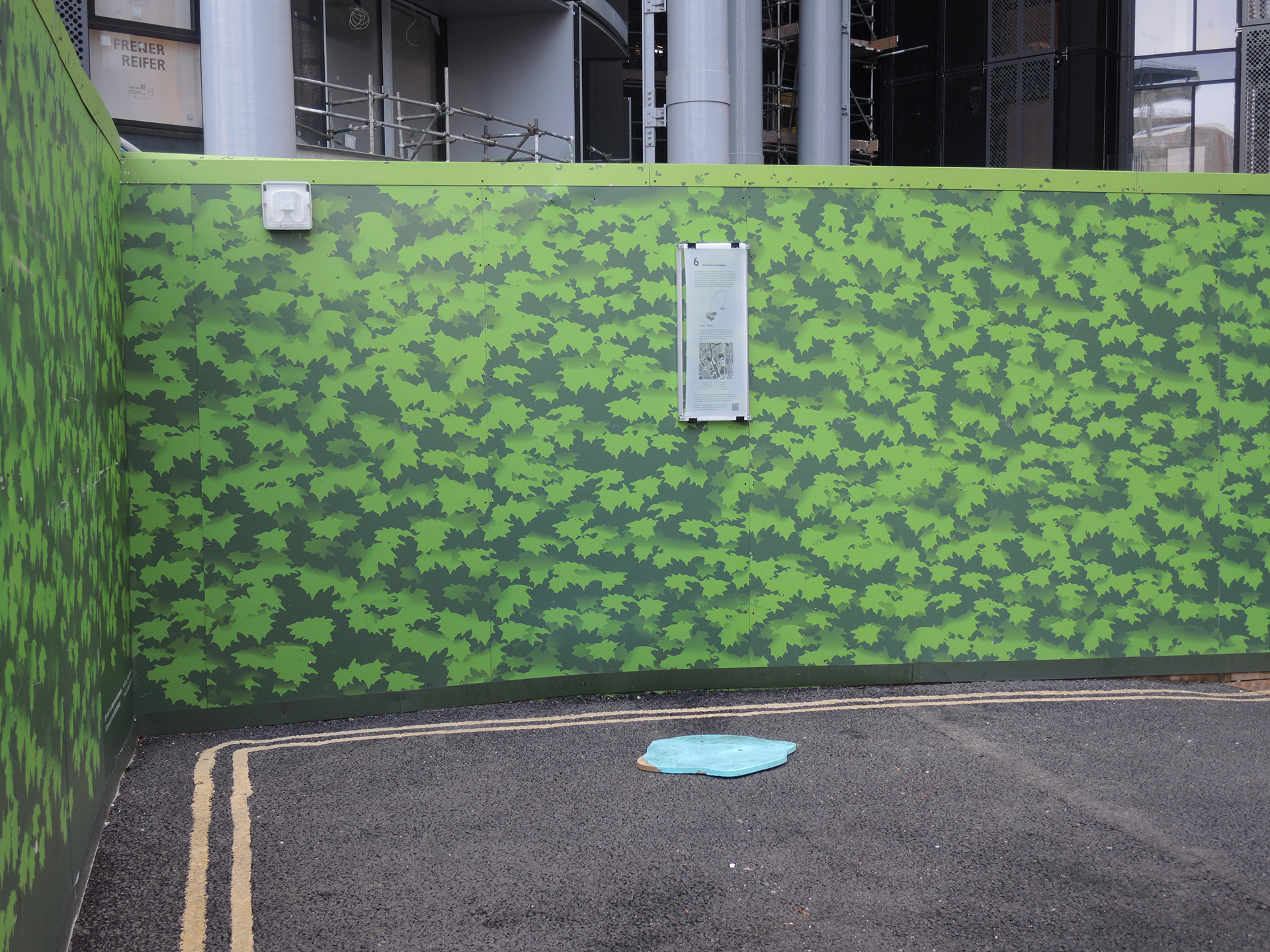 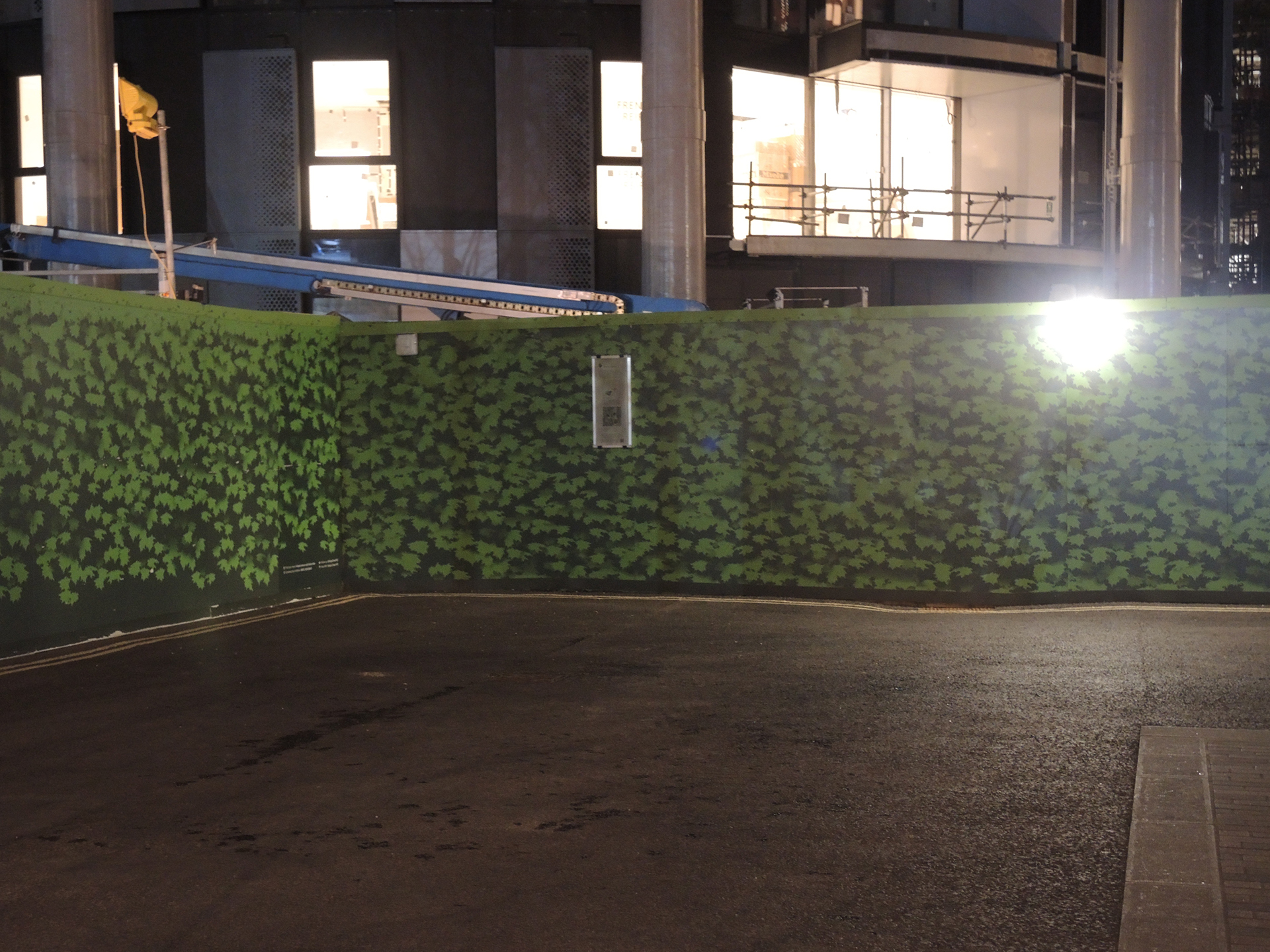 Board 6
invisible
site: Fence Woolstonecraft Street
The base plate of the invisible Board – the footprint of King’s Cross Development – marked its location next to a building fence, covered with a design of artifical nature, for three days. On the morning of the fourth day, it disappeared – together with the content of the garbage bins, that had been placed there for pick-up. 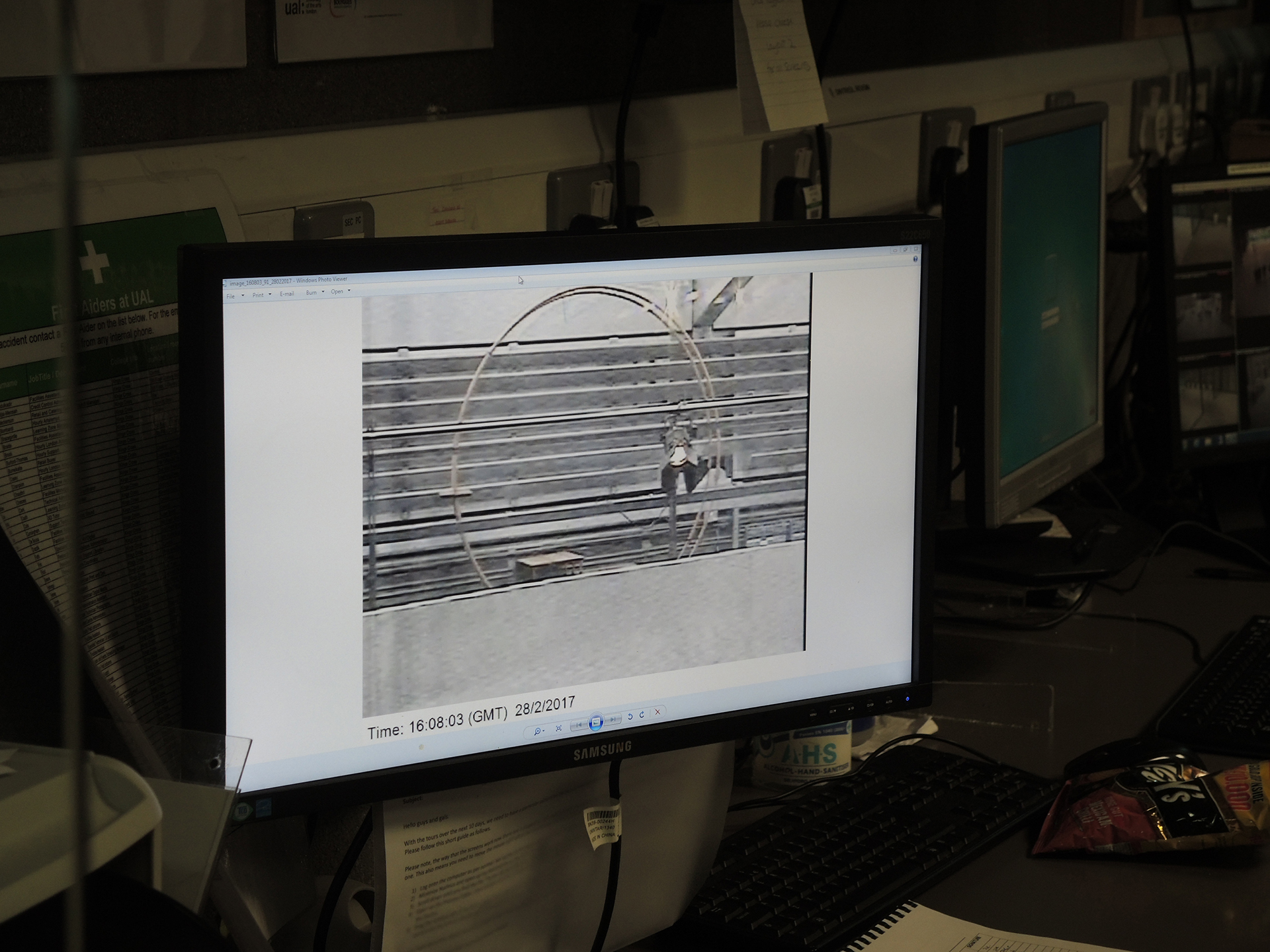 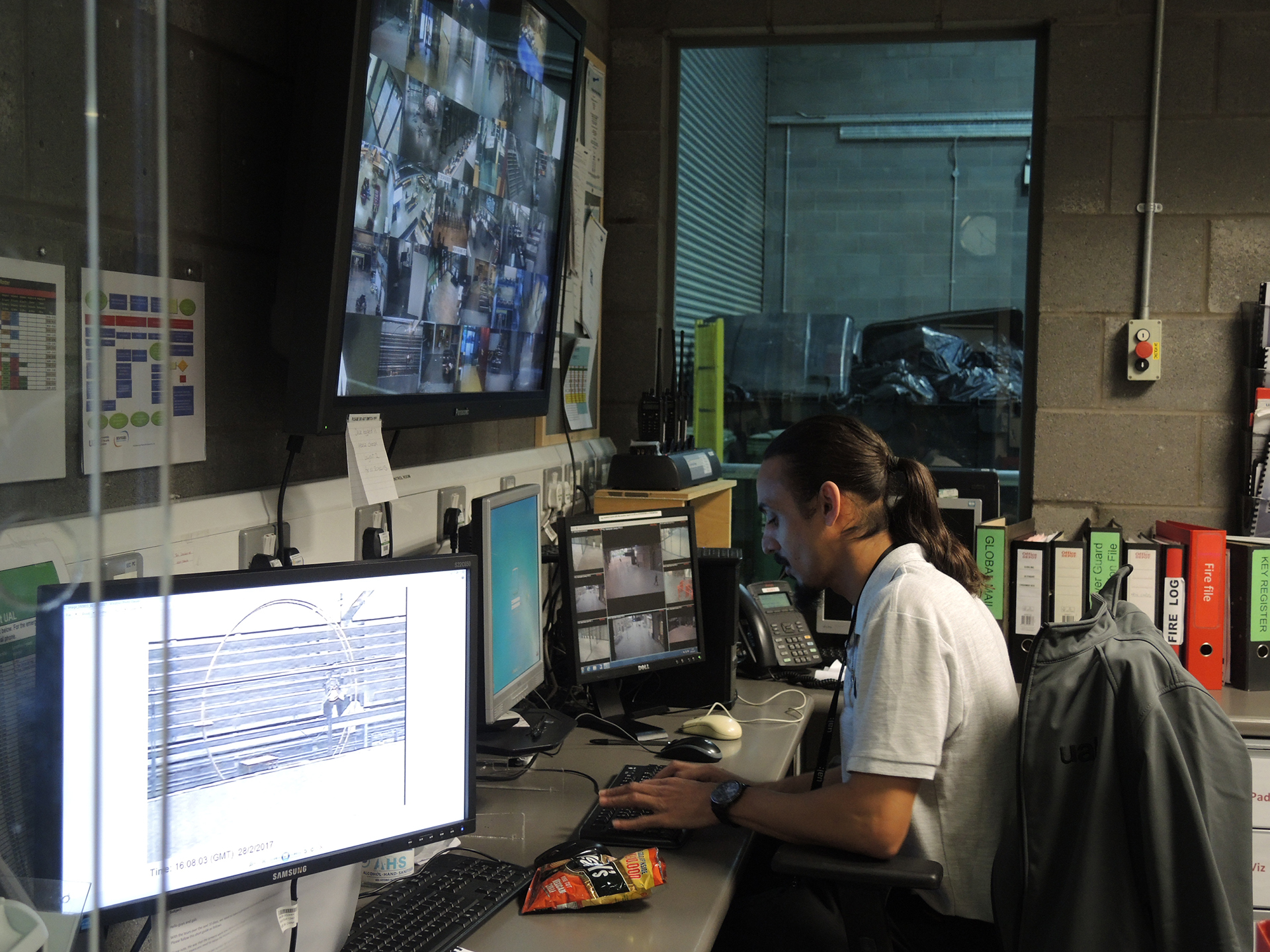 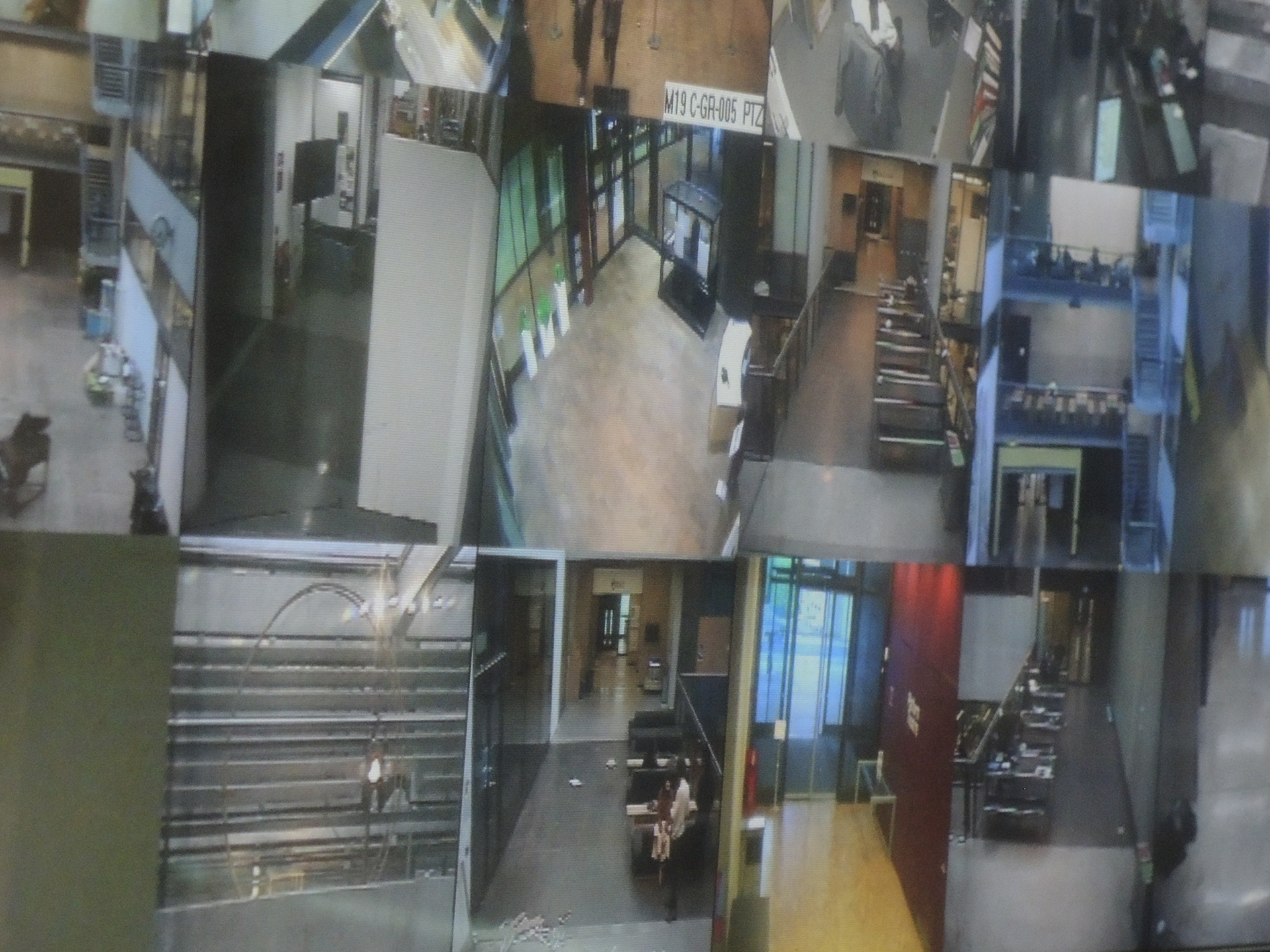 Board 7
transmitted
site: Security Room, CSM
The Board was installed without public access under the roof of Central St Martins and was visible only through CCTV in the Security Room. For the eight days of the project, the security staff became fellow players: They gave visitors access to their monitor and managed a form participants had to fill in during their walk. 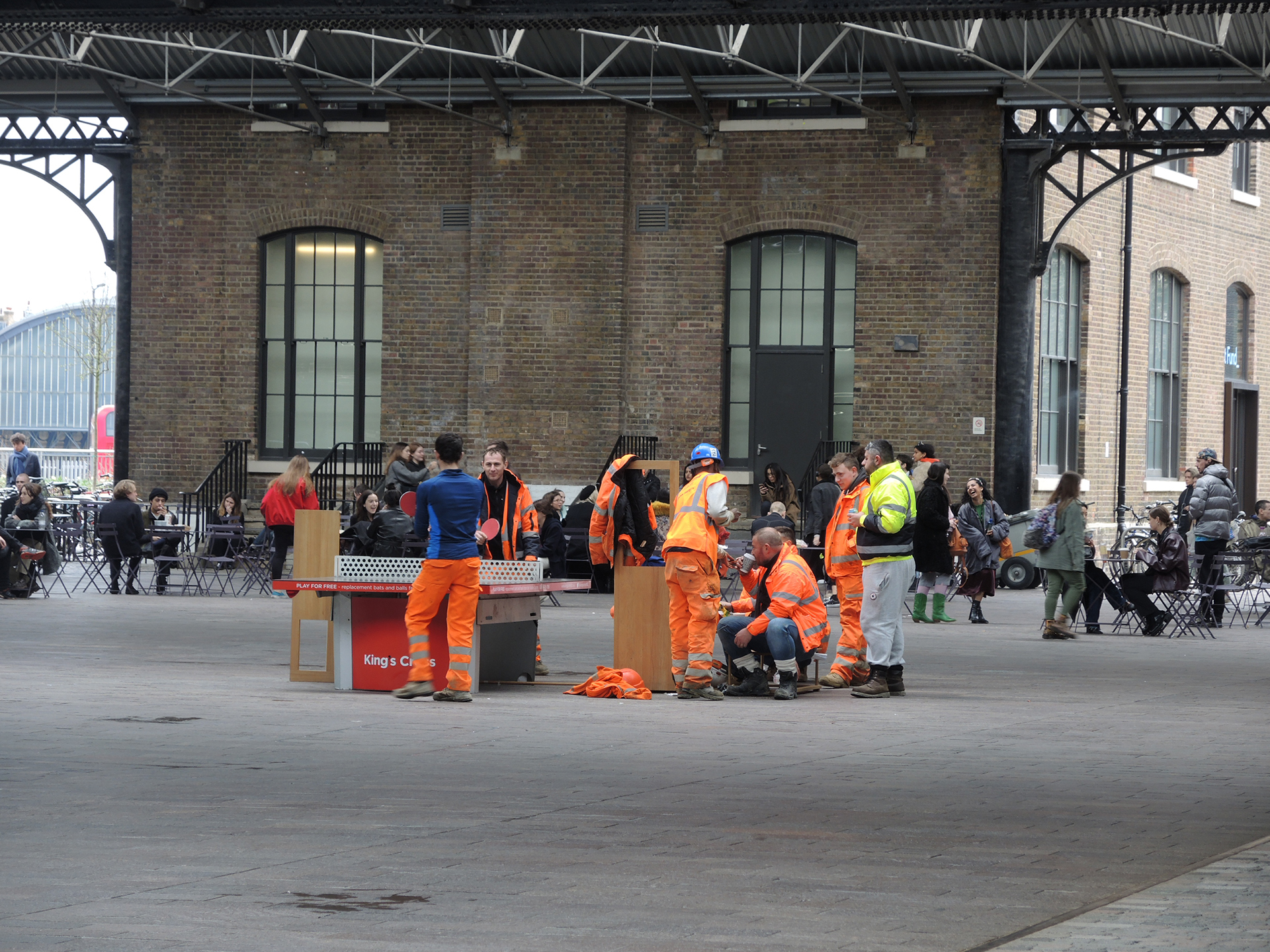 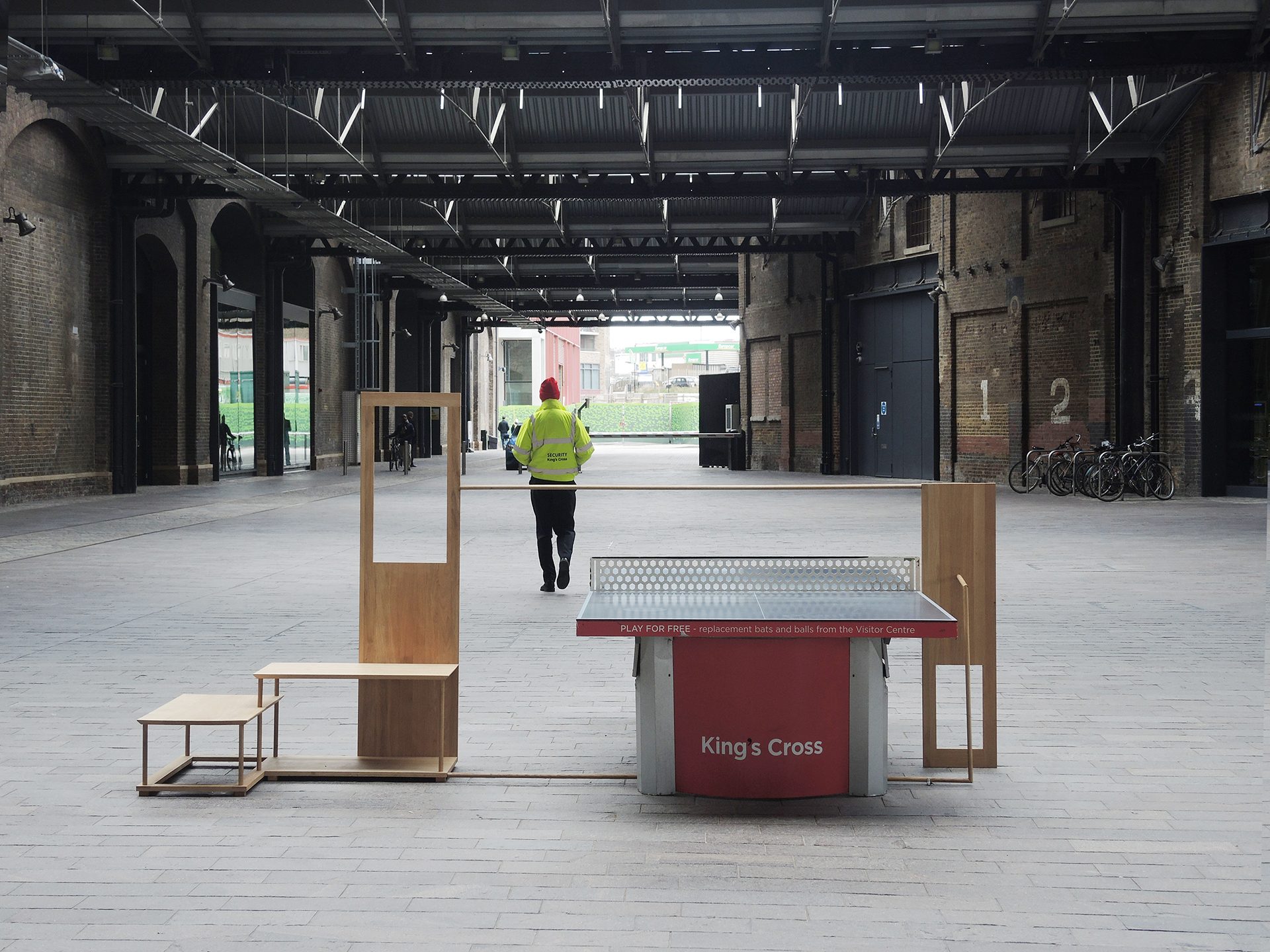 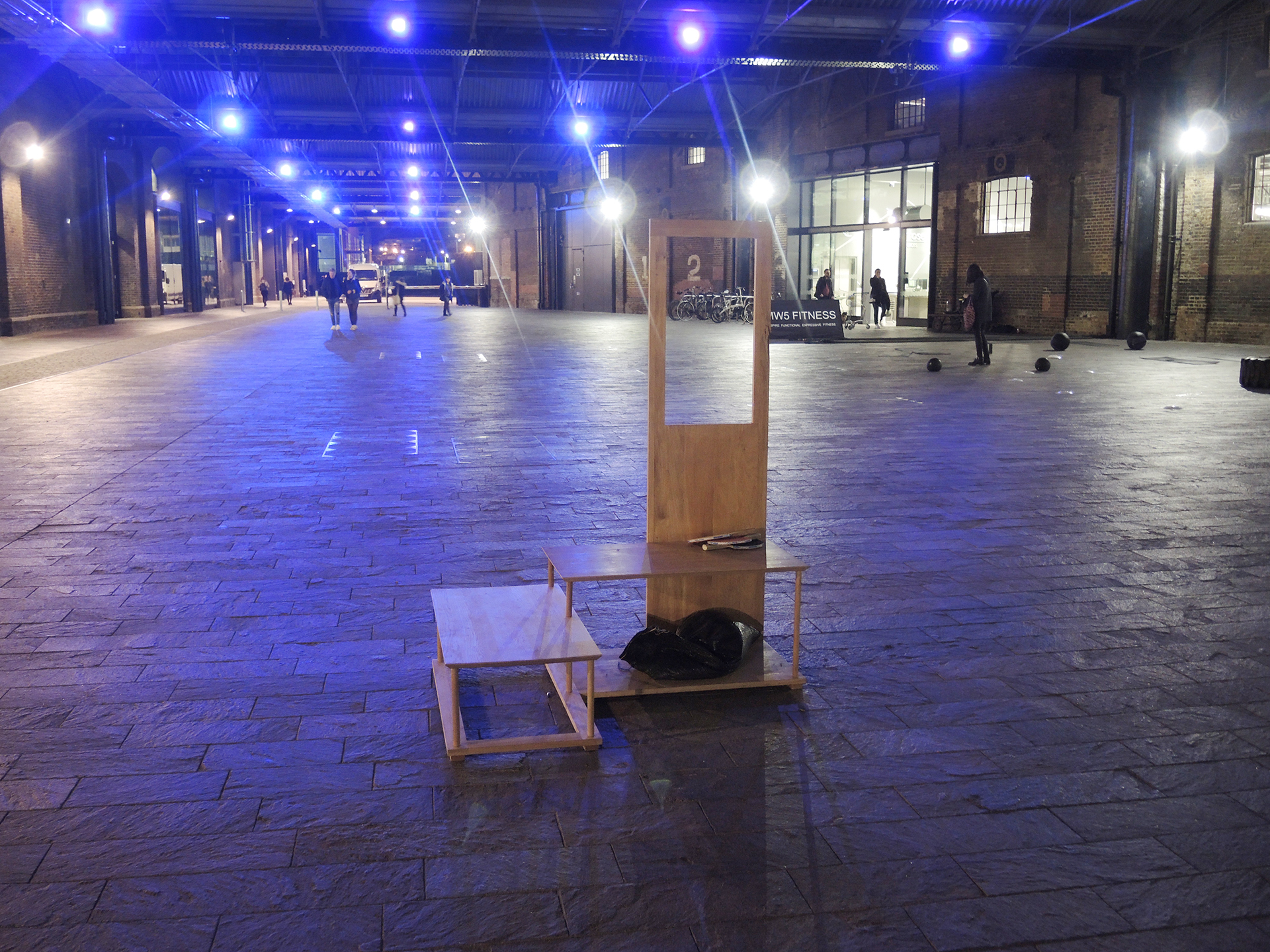 Board 8
to be played
site: West Handyside Canopy
Placed on a public square in front of Central St Martins, the Board was installed around one of the popular ping pong tables. Its cross-brace acted as a new challenge for the players throughout a week – until someone removed it on the eighth day in order to play again in the usual way. 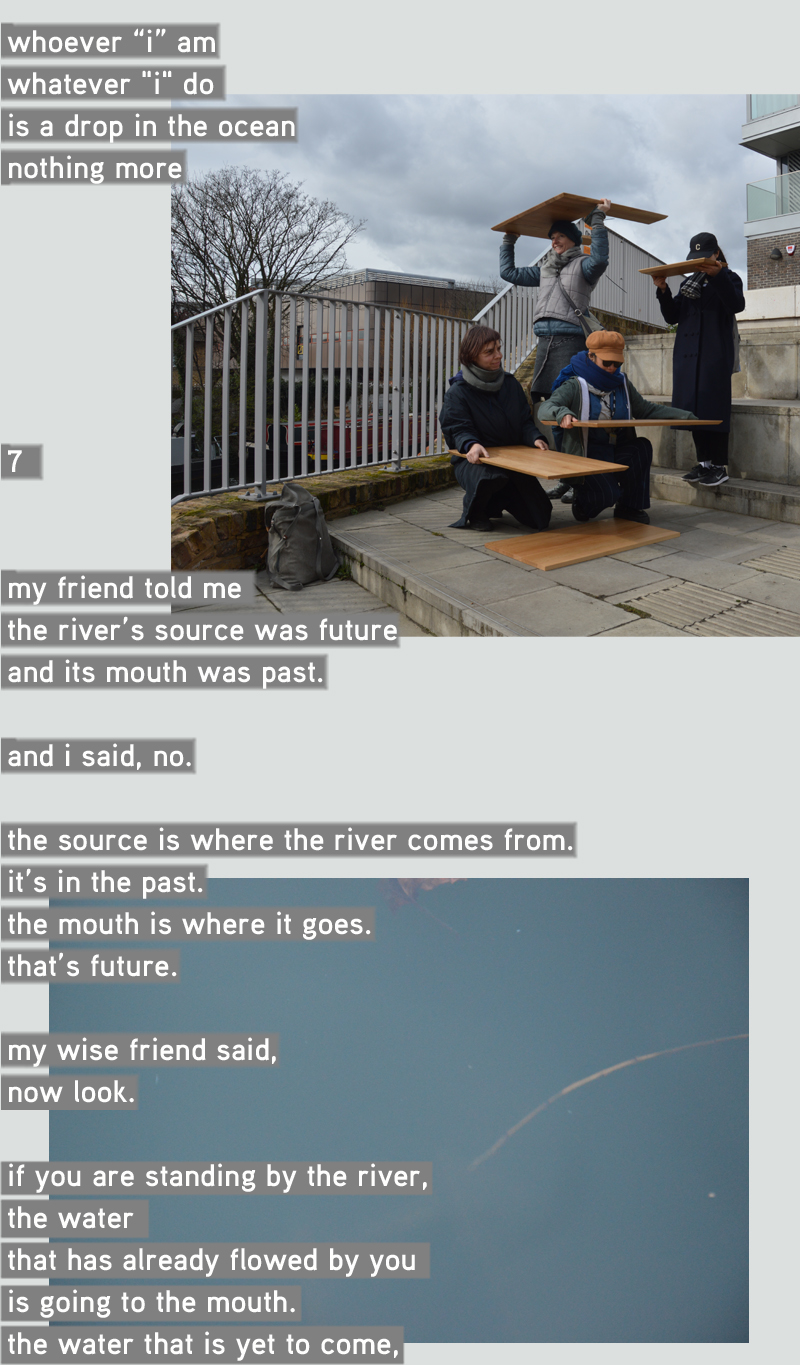 After the first working period in Japan, where the eight Assemblage Boards have beeen established as vantage points and tools for a self-examination of our own localisation and context-awareness, now they have been installed for eight days in the public space of Kings Cross and vicinity, a dense urban development area in the heart of London.
Whereas the re-search of a non-antropocentric angle was relativly well to experience, it proved tob e rather complicate in London. In a conception of the world, that ever since enlightenment has put the human in ist centre, the respective point of views here were hardly tracable and often hidden behind obstacles. What seamed natural and appropriate in an Asian everyday context, started started to fade here.
The approach to the area of Kings Cross in it“s clever and innovative strategies of urban development happened to us along its edges with the surpressed and masked aspects of the city – locations of illness, decay, dirt and death: the St Pancras Cemetery, the former Workhouse and St Pancras Hospital and the Regent’s Canal.
Entering Kings Cross along those edges established a trail of rapprochement that enabled us to enter a process of adaption. The new context went hand in hand with a process of distancing. The boards turned out to be not reachable and not usable, they dissolved and changed the media and/or its visibility.