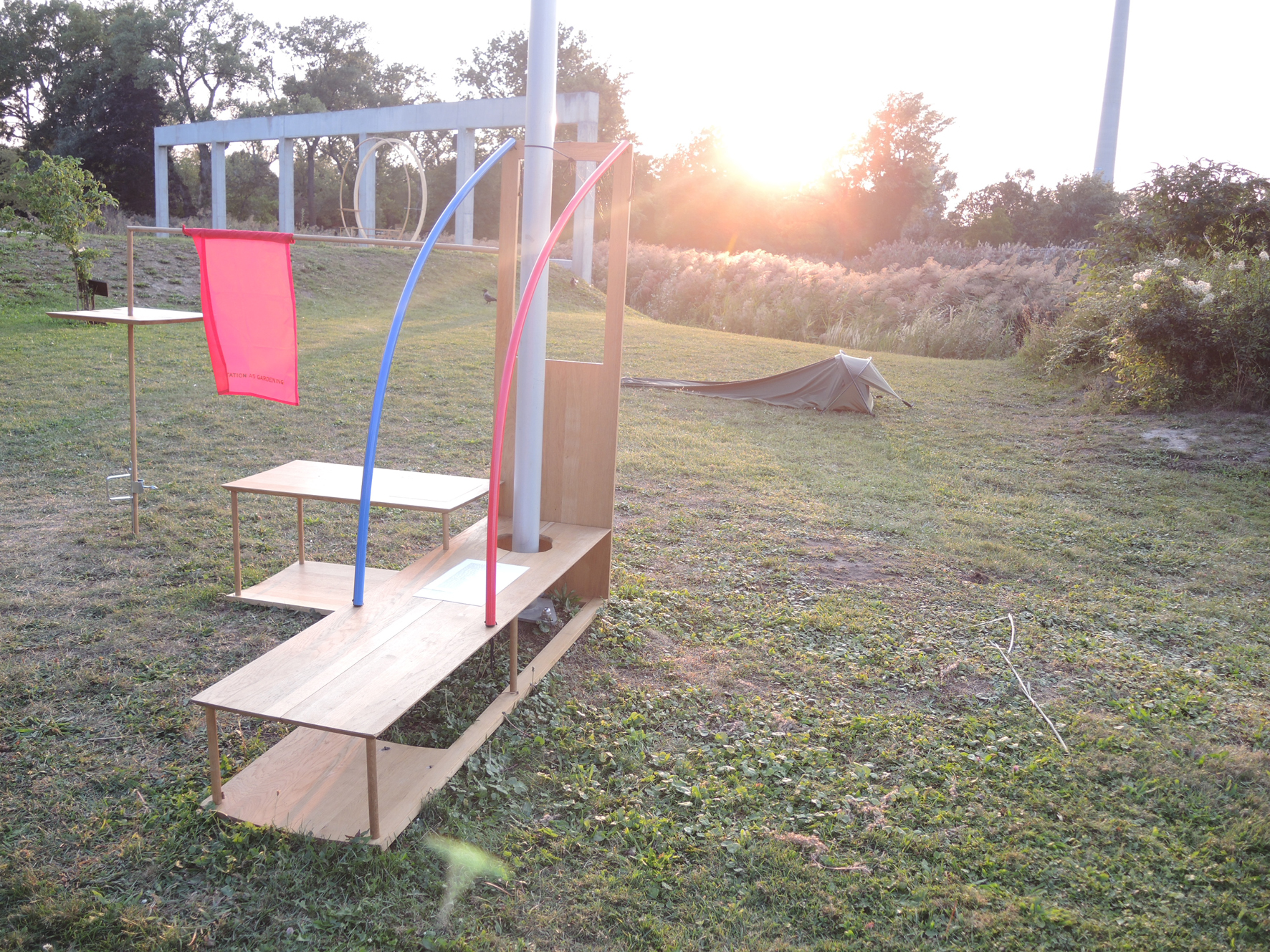 VIEW 1
Matthew Wang (SGP)
A Walk From Berlin To Vienna
2017, Duration: 29 days
Materials: Performance, various objects, hand-written text on printed paper
On August 8th Wang started walking from Berlin to Vienna with a small tent, compass and bag of basic supplies. Along the way people opened their doors and welcomed his passage. He asked each host to give him something to bring to Vienna; each also wrote a report of his condition when he was received. It is through others that the work is lived; through others he moves and rests.

Almut Rink
A Home
Board 1, 2016-2017
The board 1 is tied around the pole with the Austrian flag (next to the Korean)
in the Donau Park next to the Korean Cultural Center to indicate the national identity of the place in which Rink’s domestic affections are centered, as well as Wang’s goal and temporary residence. The flag pole becomes the substitute for the tree in Tokyo and the fence in London. 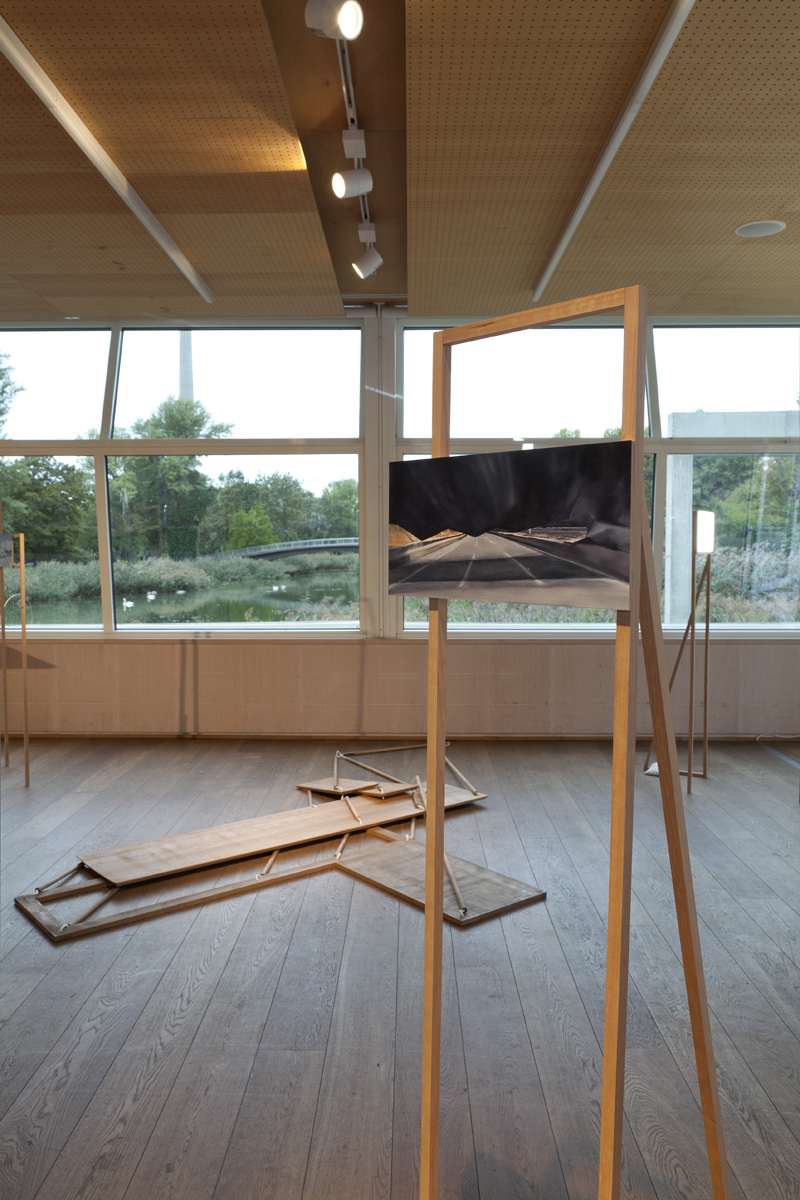 VIEW 2
Anne Eggebert (GB)
At a Distance (cherry blossom and a rock)
2017, Dimensions: Variable
Materials: mixed media including American cherry, bamboo, oil on MDF, pencil and print on paper
Referencing Sakuteiki (historic Japanese garden design), Hanami (flower watching) and locating Hashi-ishi (a bridge shaped stone), Eggebert takes the idea of making a garden at a distance and looks for the constituent parts both close to home and across virtual terrain. Her practice explores how representations of landscape impact on our performance of place and how the distinction between finding and losing one’s sense of place might be blurred.

Almut Rink
New Moon
Board 2, 2016-2017
As reaction on Eggebert’s installation Rink is laying her Assemblage Board 2 next to it on the floor – using the axonometric view. The similarity of the material of the wooden floor and the board evokes a merge of one into the other, a camouflage effect similar to the new moon, where the object (subject) is hidden, but still present. 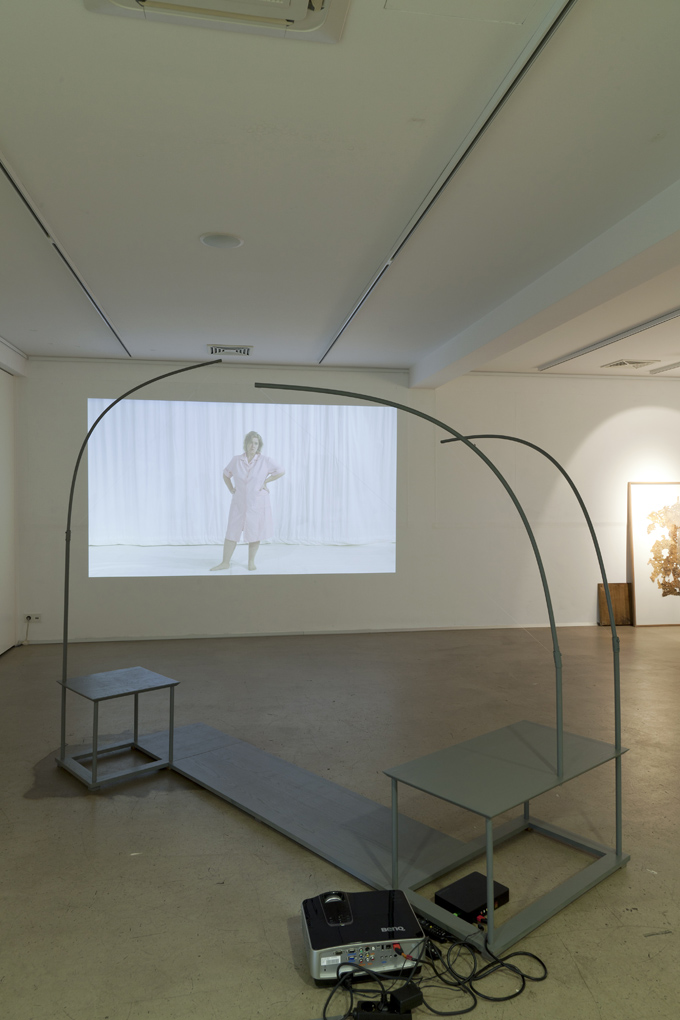 VIEW 3
Sarah Cole (GB)
Loving is Work
2013, Duration: 18 minutes
Digital video
Loving is Work was made in response to Cole’s experience of working with ‘hidden’ carers, people whose lives have become defined by their role looking after disabled, ill or dying family members. Her practice involves collaborative research into lived experience, with a particular focus on pedagogy, performance and play. Her work deploys a socially engaged methodology that puts the exchange of encounter at the heart of her enquiry.

Almut Rink
At night
Board 3, 2016-2017
The Board 3, invisible and only printed on a transparent foil in London, appears again as a sculpture, painted in dark grew, a diagonal shadow and without an object, in similarity to Cole in her video, a carer without any vis-à-vis. 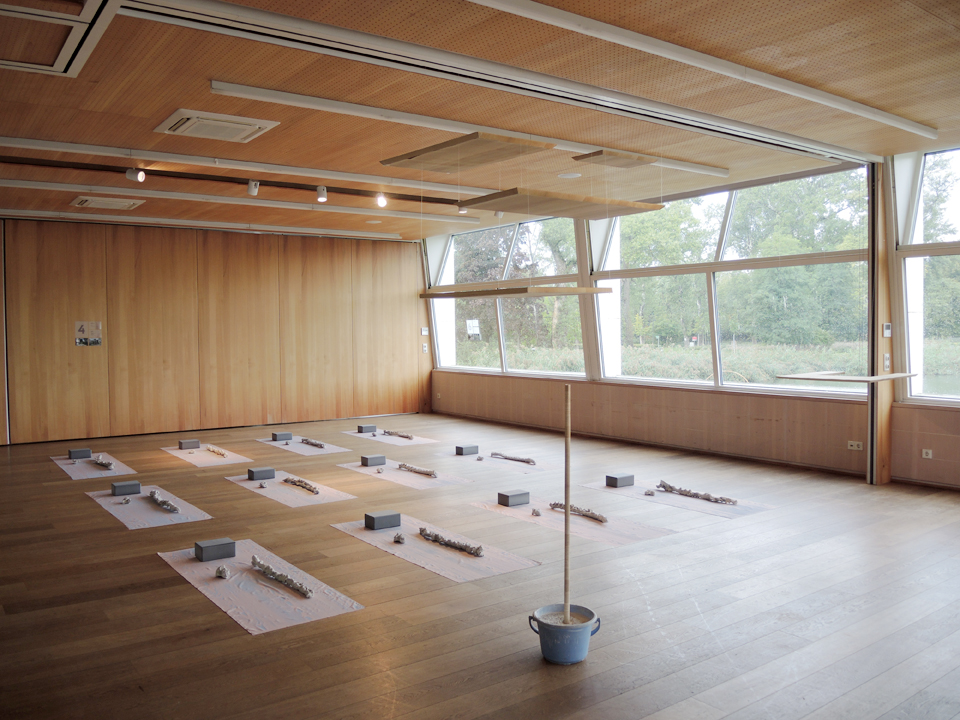 VIEW 4
Ben Cain (GB)
‚Who’s There?‘
2017, Dimensions: Variable (c. 50 x 700 x 700 cm)
Materials: Clay, hand-printed fabric, yoga blocks
A group of seemingly inert objects and materials are carefully laid out in a large open space. They temporarily make use of a multifunctional social area that is otherwise used quite differently by various bodies. The body of loose parts developed for Beyond Orientation considers the conflation of work and leisure, presents sculpture as a social space of exchange and encounter, and introduces a group of subject-objects as clandestine inhabitants of the exhibition space.

Almut Rink
Clearing Mist
Board 4, 2016-2017
Next to the installation of Ben Cain a 1:1 mock-up of Board 4 – made of paper and covered by printed oak patterns – is placed by Rink. In dissoluting and dissolving, the model starts to lift to the ceiling, anchored just by the plastic pot filled with concrete, that was already in use in Zenpukuji Park in Tokyo. The title, taken from one the original names of the Eight Views, relates to the etheric aggregate of the sculpture in relation to the Yoga quote in Cain’s artwork. 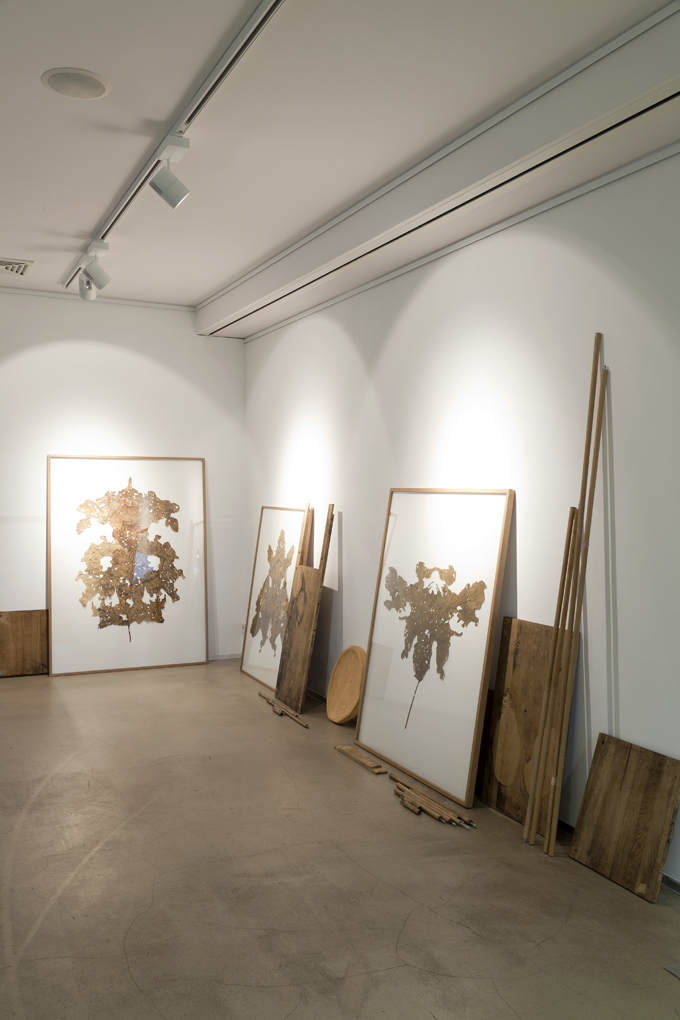 VIEW 5
Regula Dettwiler (AT)
Sleeps a Song in Things Abounding, series A#5, B#6, B#8, B#9
2010-2012, Dimensions: Variable
Materials: Pressed plant matter on museum board
Dettwiler’s practice uses various artistic methods to develop strategies and representational forms of naturalized artificiality. Her rearrangements of natural history reveal our deep connections to, whilst simultaneously thinking ourselves outside, nature. The plant leaves in in this work are manipulated in such a way that they refer to a deep psychological dimension as „Rorschach pictures“ and to show „nature“ as the projection surface of human longings and fears.

Almut Rink
The Evening Gong
Board 5, 2016-2017
In response to Regula Dettwiler’s series „Sleeps a song in Things Abounding“ Rink puts her Board 5 in parts on the floor, mixing them with several art works of Dettwiler’s pressed and framed plant collages. The board with it’s traces of Regent’s Canal in London becomes a picture and the Dettwiler’s pictures become possible parts of the board – a tool for the approach of what is surrounding us. 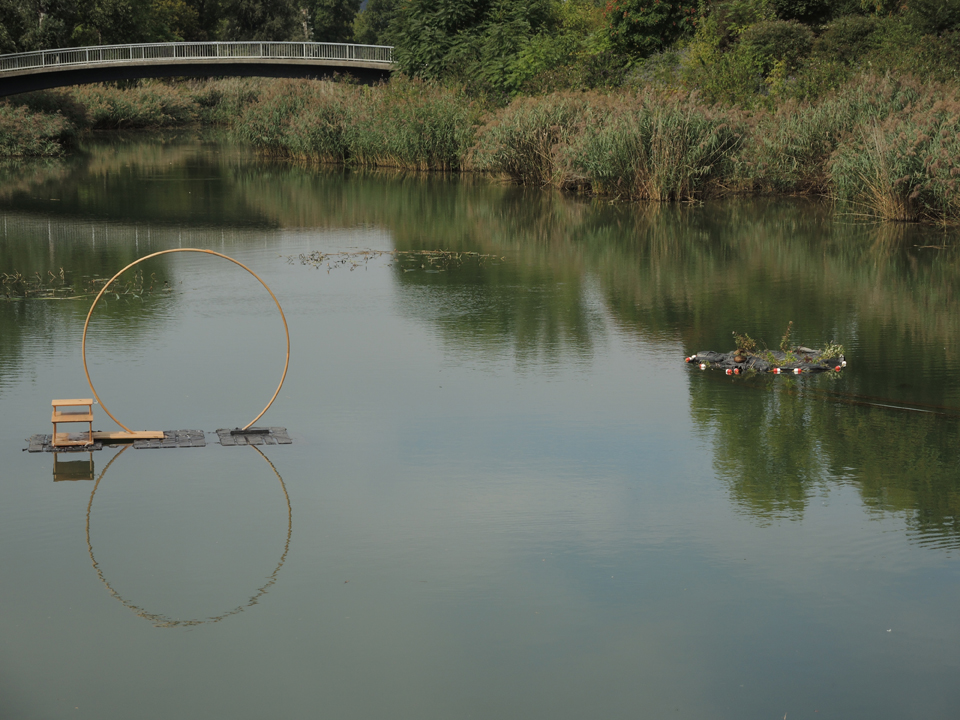 VIEW 6
Margot Bannerman (GB)
Untitled (Islands)
2017, dimensions: Variable
Materials: Re-used polypropylene sheeting and plastic, floating rope, ski-floats, local vegetation
As temporary drawings on the lake, the ‘islands’ offer imagined vantage points within concentric rings of lake / park / island. With their precarious equilibrium, wayward vegetation, possibly toxic buoyancy, there is an ambivalent proposal suggesting adaptation, amelioration, anxiety and pleasure. Bannerman’s practice explores how found spaces and structures, might be co-opted and re-deployed for growing or cultivation, drawing on overlaps between the social and organic within the context of environmental concerns.

Almut Rink
From Distant Shore
Board 6, 2016-2017
Sharing the spot of Irissee at Donaupark in front of the pavilion, the Board 6 becomes a floating raft. Bond at a tap of the lake’s fountain, its position and reflection is changing due to the weather conditions. The round becomes an eight in the mirror of the still water surface – pointing at the Eight Views as a inherent and underlying structure. 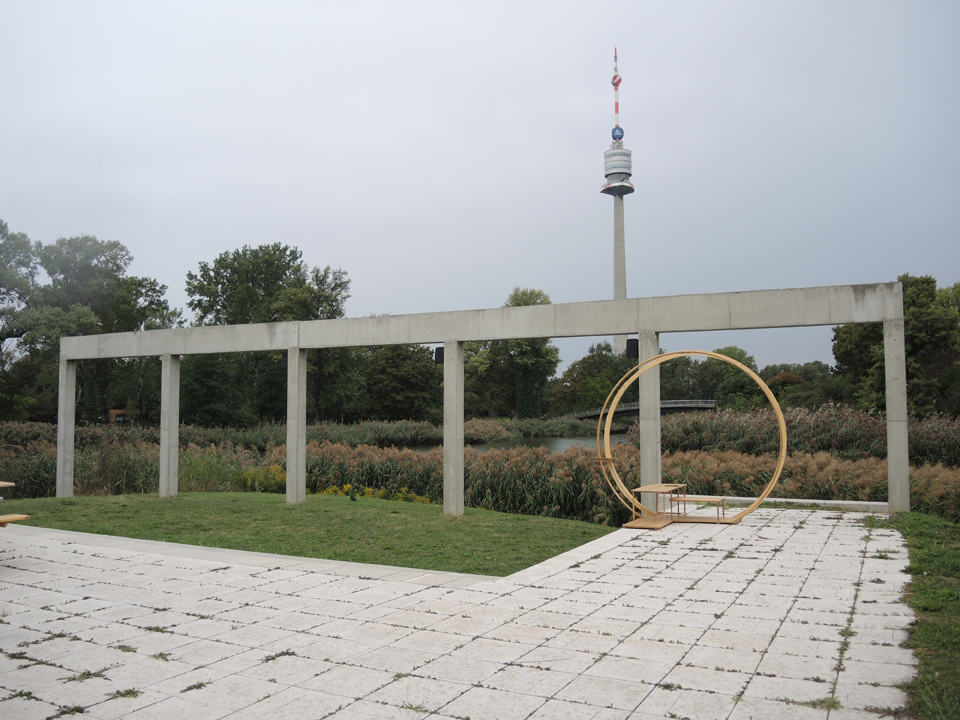 VIEW 7
Polly Gould (GB)
Manifesto for an Architecture of Atmospheres
Duration: 3:20 minutes
Materials: Digital sound work
Visions of the future are often expressed through visualisations of our built environment. Architecture makes these propositions in the temporary form of the pavilion and the written form of the manifesto. Gould uses sound and voice to build a temporary sonic space that explores an imaginary atmospheric architecture. It supposes a link between the breath of interior spaces and the atmosphere on a global exterior scale and an interconnectedness of human and environment.

Almut Rink
River and Sky
Board 7, 2016-2017
Do parallel lines meet at infinity? The geometry says : no. In the projective space each line is circular rather than linear, it meets itself at infinity. So river and sky can never merge. Here, Board 7 is positioned in at the terrace of the building, facing the Danube Tower, parallel to the concrete structure that is thematized in Gould’s sound installation. It is about education, ideal and simulation. One bow of the board is replaced by a implant, a prothesis that cannot reach the original’s elegance. 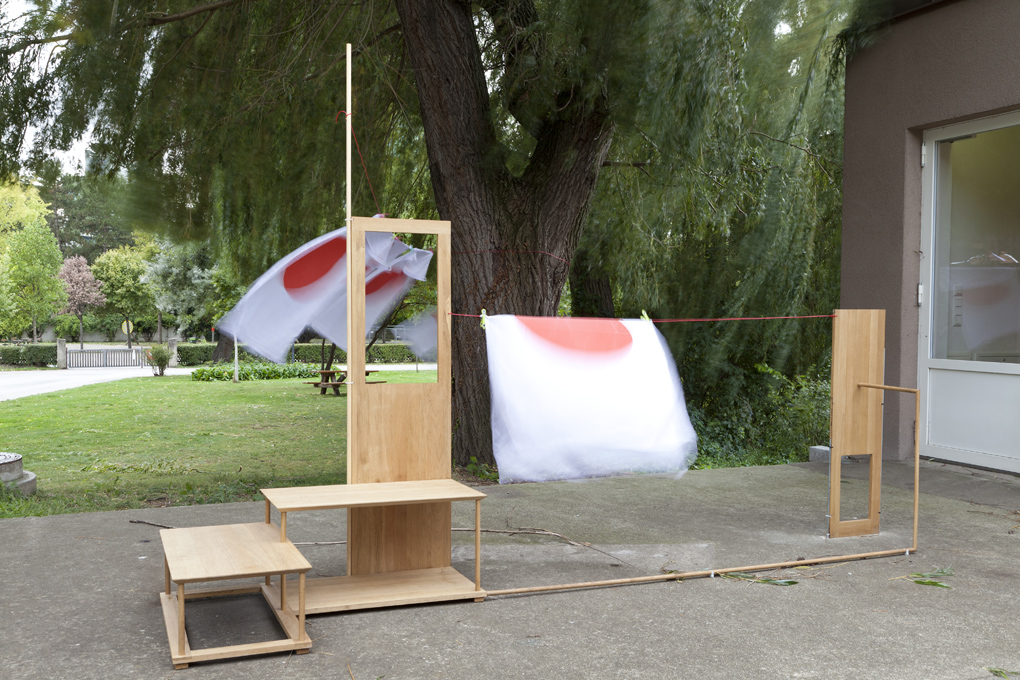 VIEW 8
Kyoko Ebata (JP)
Washing Hinomaru
Dimensions: Variable
Materials: Mixed media
Ebata washes Hinomaru (the national flag of Japan) as a performance of ceremony, in a continuous cycle conducting the repeated washing, line-drying, ironing, and folding of a number of the flags; their line drying doubling as their display. Ebata works on diverse projects, each employing a concrete poetics to investigate or circumscribe subjects which are felt as absent, abstract, or invisible with antilogy often referring to the state of society.

Almut Rink
A Village
Board 8, 2016-2017
Community produces history. As the host of Ebata’s flags that need to dry after washing, the installation of Board 7 at the back terrace in front of the installation of „Washing Hinomaru“ also serves as a vantage point for a long clothesline pointing into the infinite space of the park.

Orientation provides us with an idea about the world around us. “Beyond Orientation” questions its underlying structures, extends and moves them so that placing ourselves can be experienced as a dynamic process. Including all constitutive elements, it is sustainable, but not static. The exhibition “Beyond Orientation. Eight Views” is the third part of the research project “Orientation as Gardening” (conceived by Viennese artist Almut Rink and author Carola Platzek, funded by Science Fund Austria). It continues their arts based research in the form of a curated group exhibition at the Korea Kulturhaus Vienna.

The final part “Beyond Orientation. Eight Views” brings the London and Tokyo experiences back to Vienna. Almut Rink continued her research and, together with Anne Eggebert as a co-curator, opened the space for an exchange with eight artists. The exhibition provided a discourse space for a temporary collective.

The Korea Pavilion at the outskirts of the city acts as host, providing a space where nature and architecture merge. Coming from the antique idea of a “Care of the Self” that was re-discovered by Foucault, Almut Rink will continue a discourse started in Japan: exploring the subject not as an entity but as a process composed of relationships – above all a relationship with itself.

The eight Assemblage Boards turned into supporting structures, framing the other artworks and setting up relationships between them. They enter into a dialogue with them, adapt to them, frame them, contradict. Out of the relationship between the two works, a moment of encounter evolves, a portrait of the present moment.

What links the artworks are questions of orientation and cultivation, care and relationship, autonomy and dependence.